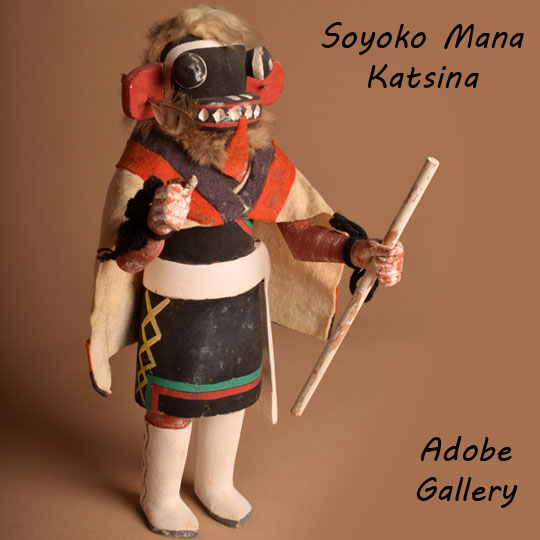 This Hopi Pueblo Soyoko Mana Katsina Doll appears to be from the 1950s.  She was hand carved from cottonwood root and painted with water-based pigments.  She wears a felt cape, has black yarn tied to both wrists, has a fur neck ruff and a felt tongue.  On her head she has a mop of cotton.

Soyoko Mana is a female ogre katsina.  “Appearing in the company of her towering brothers, the Nataska Mana or Soyok Mana comes during the Powamu ceremony.  Usually she will be found close to Nataska’s Uncle, and when food is offered to her that does not satisfy the Ogre’s wants, she whistles in disapproval.  She carries only the large burden basket into which she puts any acceptable food. . . . She is not a leader, but is essentially one of the figures used to carry the spoils back to the kiva.”  [Wright, 1973:77]

Condition: good condition with some soiling.  The left arm separated at the elbow and has been glued.

Provenance: this Hand Carved Hopi Pueblo Soyoko Mana Katsina Doll, circa 1950s is from the private collection of a gentleman