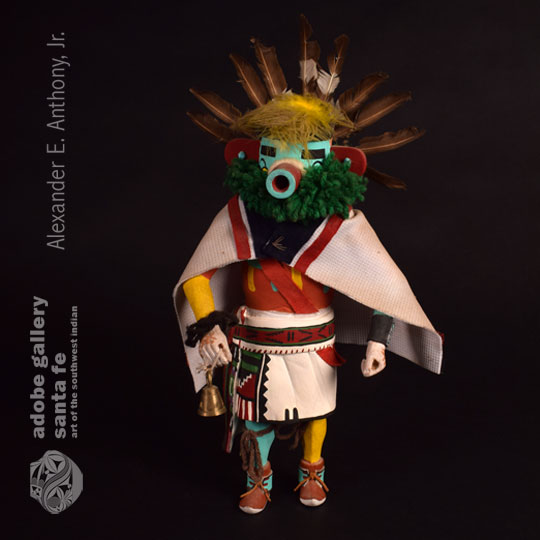 This Hopi Pueblo carving of the Talavai katsina is probably from the 1960s. It is not signed with the name of the carver or the village in which he lives. It is a very good carving with excellent painting. The body stance is a slight forward lean, yet, he is so well balanced that he stands unaided.

The Talavai or Morning Katsina formerly appeared in pairs on the rooftops and sang songs, waking the people in their village. During the day they would dance with the other katsinas whom they led and prompted in the singing. This role is no longer used in any of the villages. They still appear with the other katsinas in the Powamu ceremony and are most often standing in a set to one side of the main movement of the procession. Occasionally they sing as they stand holding their spruce trees and ringing their bells.

The specific name of this katsina is also the generic name of a group of katsinas that appear at dawn on the last day of the Bean Dance (or the Powamu Ceremony) and give presents and bean sprouts to the children of the village. This latter group, referred to as Talavai katsinas, may include Huhuwa, Ma'alo, Talavai, Hemis and many others to include the Morning Katsina.

The Powamu is one of the most important of the Hopi ceremonies. It occurs in February each year in most Hopi villages. The most important aspect of the Powamu ceremony is the anticipation of the coming growing season, with ritual designed to promote fertility and germination. The children probably think the most important thing about Powamu is receiving gifts from the Katsinas.