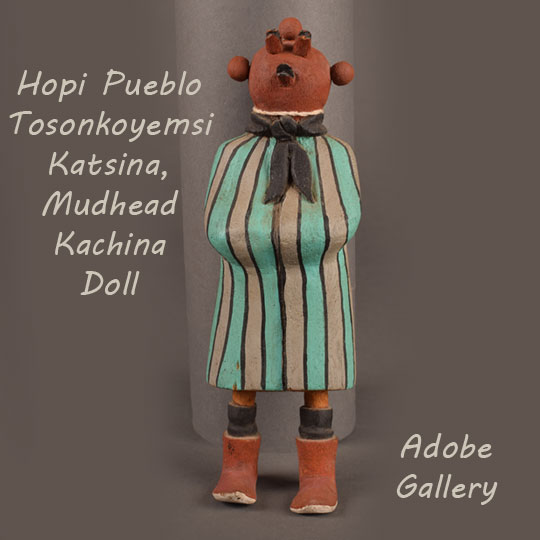 This katsina is known as the Toson Mudhead, Toson Koyemsi, or Mudhead Ogre depending on the reference book consulted.  He is not an Ogre, however, but a relative of the family. The most proper term is Tosonkoyemsi Katsina.  This is an indication of the variety of Koyemsi and their differing functions.

A number of the Tosonkoyemsi Katsinas used to come with the Soyoko on Third Mesa at Hopi Pueblo and demand sweet cornmeal from the girls. They would then sit and taste the cornmeal to see if it was well-ground and sweet, and from this comes their name of Sweet Cornmeal Tasting Koyemsi. Since the Soyoko has not been performed on Third Mesa for over half a century, this kachina no longer appears in this role, part of which is now played by Heheya Aumutaka.  The Tosonkoyemsi does not appear on First Mesa, and the Second Mesa form is radically different.

The Tosonkoyemsi wears a sack mask of the same style of the other Mudhead Katsinas.  He has round eyes and a mouth made of corn husks. He generally is fully wrapped in a blanket and wears traditional pueblo moccasins.  He carries no items in his hands.

As is traditional this carving was made from cottonwood root that was properly dried in the sun for months so that it would not crack at a later date.  The paint used appears to be acrylic, which would establish a date of post World War II, probably the 1960s.

Condition: this Hopi Pueblo Tosonkoyemsi Katsina, Mudhead Kachina Doll is in very good condition and stands unaided.  It is possible that the feet have been repaired but that is not obvious.