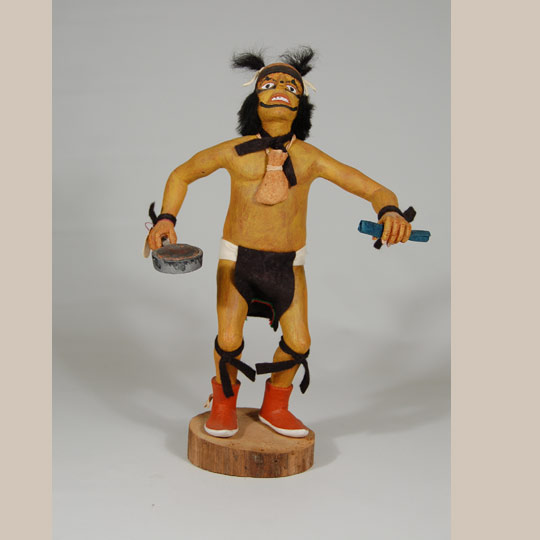 According to Barton Wright in his book Clowns of the Hopi: Tradition Keepers and Delight Makers “The Sikya Tsutskutu pull their hair up into clumps, one at either side of the head and sometimes one on the front.  They daub a thick yellow paint over their entire bodies and heads.  Below their mouth and each eye, they paint thin arcs of black with ends upturned.  A black dot is placed under the nose and over each eye at eyebrow level.  This decoration diverts the eye from the normal visage and renders the individual portraying the clown almost unidentifiable. They wear a piece of white cloth or blanket around their hips.”

This carving of the Yellow clown was made by Ernest Chapella who passed away tragically in 1997.  Chapella was an outstanding carver of katsina dolls and it is unfortunate he is no longer with us.  He was producing dolls at a time when one-piece carvings were the exception and not the average.  His carvings are not of the one-piece style but the anatomy and facial features are well above average.

This clown carries a skillet in his right hand that is full of blue cornmeal for making piki and in his left hand he has a rolled up piki.

Condition: this Hopi Sikya Tsutskutu - Yellow Clown with Piki is in original condition

Provenance: from the estate of Tom Mittler, a former resident of Michigan and Santa Fe who purchased it in 1989 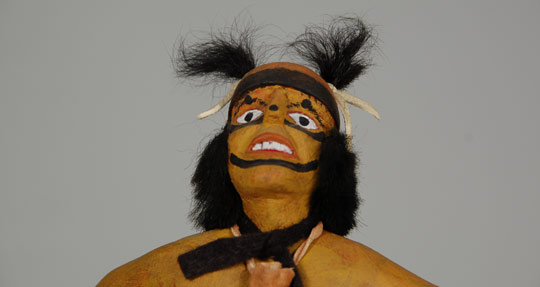