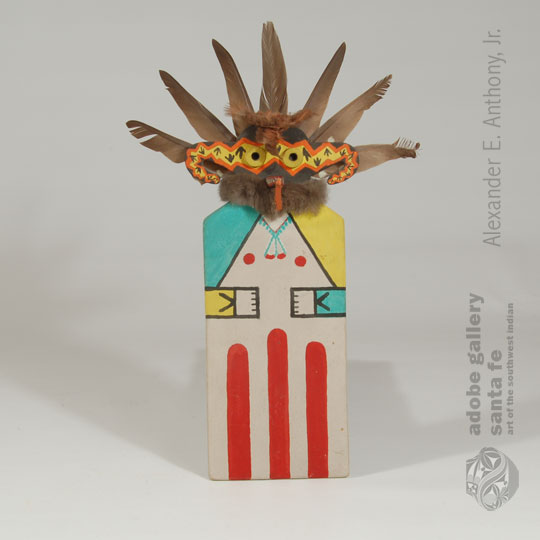 Situlili is a common Katsina on Second Mesa, but why he should bear a Zuni name is rather hard to determine.  It is possible that his name refers to tinklers that he wears on the bottom of his kilt rather than the Zuni name for rattlesnake.

He often appears as a guard in both the Pachavu and the Powamyu Ceremonies.  His actions are characterized by rather sudden movements followed by pauses as he surveys his surroundings.  Apparently, he can come in a variety of face colors the most common of which are yellow and brown.  Wright,1973

This version is the flat style doll presented to infants and young children.  It has the body of Hahai-i-Wuhti, because she is the first Katsina image presented to the young. The face is that of the Situlili Katsina.

Provenance: from the extensive collection of a family from Oklahoma, to whom we sold this Katsina doll in 1997.