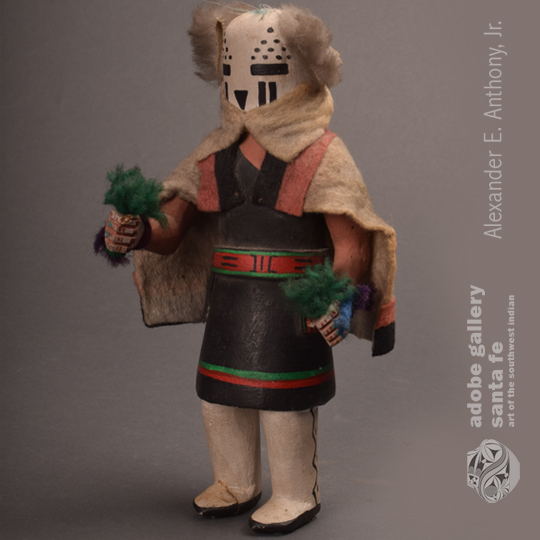 Katsinas have lives that are the same as any other Hopi Pueblo resident, and consequently most of them have mothers, wives and sisters who accompany them when they are seen in ceremonies and dances.  These female katsinas are impersonated by men with one exception, the Pachavuin Mana. In this one instance the impersonator is a woman.

Other personages often resemble Momoyam or Katsina women but are not, instead they are social dancers or members of women’s societies.  The men who take the impersonation of the katsina women in ceremonies do so by personal choice or the general accord of their kiva mates.  The decision is often based on the men’s small size or simply because they do an excellent job of impersonation. There is never any onus attached to the role.  -Wright 1977

This Katsina is a personage whose purpose is to bring cold weather and, with it, an abundance of moisture in the form of snow, to fill the ground with moisture for the coming year.

The doll is basically a wood carving but has been embellished with a shawl ad neck wrap made of white felt.  It was painted with acrylic paints, a clue to dating it to the 1960 or 1970s.

Condition: the Hopi Small Nuvak'chin Mana - Snow Maiden Katsina Doll has had one foot broken and glued.  The white cape is soiled with fireplace smoke.

Provenance: from the substantial collection of katsina dolls from an Oklahoma family.