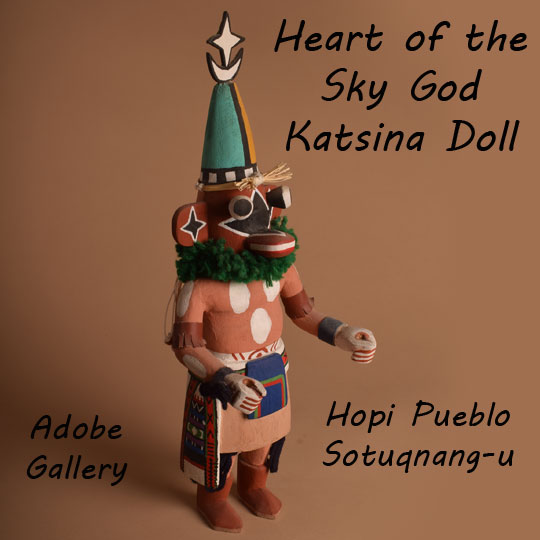 Harold S. Colton, in his book Hopi Kachina Dolls, beautifully explains the difference between Hopi Katsinas and Hopi Deities, so we quote him.

“The religion of the Hopi Indians in certain ways resembles that of the ancient Greeks.  It is polytheistic, because there are many gods, and animistic because of the belief that all animate objects, plant and animal as well as some inanimate things, have spirits that the Hopi visualize in human form.  When a Hopi goes out to gather yucca roots to use as a shampoo, the first plant he finds, he prays to and passes by, gathering the second one. When he goes hunting he prays to the spirit of the game and apologizes for having to take their lives.

“Sotuqnang-u, the god of the sky, the clouds, and the rain, is good, dignified, and powerful.  He is occasionally impersonated in one of two forms, masked and unmasked.”

This version of the deity is masked with a large star on his face and smaller stars on his ears.  He wears a tall conical hat with a moon and star at its crown. On the back of his mask there is a pair of rain clouds and there is a star on the back of each ear.  He has a green ruff round his neck. Body paint on the front, back and shoulders includes white circular clouds. He wears a Hopi traditional embroidered sash, a red woven fabric belt and has a fox tail hanging down the back of the kilt.

- Kachinas: a Hopi Artist’s Documentary by Barton Wright with paintings by Cliff Bahnimptewa