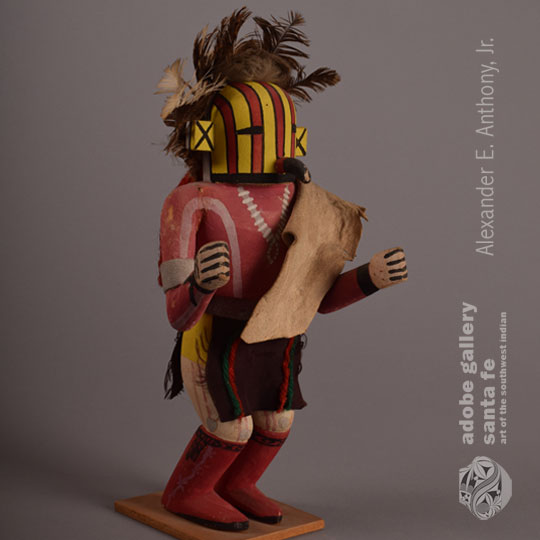 This katsina has regularly been called a Laguna Gambler.  It is not known where that name originated. It is a Hopi Katsina and its Hopi name is Sotungtaka. Barton Wright, in his Complete Guide to Collecting Kachina Dolls, calls the Sotungtaka, “Laguna Corn Kachina” so there is some confusion regarding the proper translation.

Harold Colton, in his Hopi Kachina Dolls book, does not list Sotungtaka, and neither does Alph Secakuku, in his book on Hopi katsinas.  We are therefore down to only one reference for this katsina, and that is Barton Wright, who states “This Corn Kachina appeared quite recently, apparently within the last twenty years.  There are two main varieties that appear with each other. One is clothed and acts as the side dancer for the other who appears bare chested. Some Hopi say that he comes from Santo Domingo and other aver he is from Laguna.  He dances gracefully gesturing with the objects in his hands. This form is sometimes called the Laguna Gambler.”

Since Barton Wright does acknowledge that it is sometimes called the Laguna Gambler, we will stick with that designation.  The doll displays its traditional red and yellow striped face, its featured bare chest, has a hide skin over his left shoulder and wears a black loin cloth.  On the back of his mask is a beautiful display of feathers which were secured with red yarn. He never carried anything in his hands. The doll is from the 1940s.

Condition: this Hopi Sotungtaka - Laguna Gambler Katsina Doll is in very good condition, with a minor crack on the right shoulder.