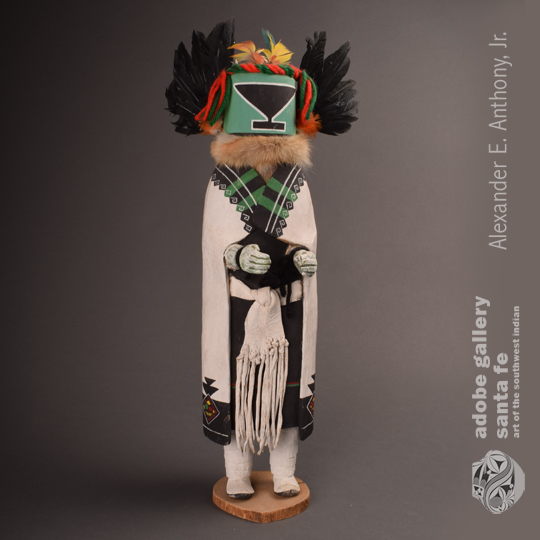 Crow Mother is a female katsina, however, she is always personated by a male, as are all female katsinas. The carver well illustrated that this is a tall man.  The body style is that of a young man, tall and slim. The doll is basically a complete wood carving but embellished with other materials—leather white wedding sash, fur neck ruff, and yarn and feathers on the head.  She has a string for hanging on a wall and a pedestal for display on a flat surface. The pedestal is easily removable should one wish to display her on a wall. The carving appears to have been completely accomplished with a knife as beautifully illustrated on the white manta.  There was no attempt, fortunately, by the carver to sand away the knife marks.

As we explained recently when posting another Crow Mother Katsina doll, there are two functions for which she is known—one is as Crow Mother and the other as Crow Bride.  We repeat that explanation for those who missed it recently.

As Crow Bride, she performs a role quite apart from her appearance as the Crow Mother.  There is a legend that relates her journey as a bride and her return as a married woman. As the Crow Bride she appears at second dawning to the east of the village and moves slowly toward the town bearing in her hands a large tray of corn sprouts.  Entering the village, she pauses and begins to sing in a subdued voice. Completing the song, she moves sedately forward to another point and again pauses to repeat the performance. At each pause women come forward to take one of the corn sprouts from her tray and to cast meal upon her.  Her slow progress eventually brings her at full dawn to the Chief Kiva where the kiva chiefs await her. In some villages, she is joined by Eototo and Aholi to whom she gives prayer feathers and meal. She then makes her dignified way out of the village and disappears toward her home in the San Francisco Peaks.

As Crow Mother, she appears on all three mesas, usually in connection with the initiation of the children, although she also appears on other occasions.  At the initiation rites, she descends into the kiva bearing many yucca blades bound together at the base. She takes a position at one corner of the large sand painting on the floor of the kiva, with one of her “sons” on either side of her.  As the candidate is brought to the sand painting she hands a whip to one of the Hú Katsinas who gives the child four healthy strokes with the yucca blade. When the yucca becomes worn it is handed back to the Crow Mother who then supplies a new one.  When the initiatory whipping is over, she raises her skirts and receives the same treatment accorded the children. They are then given prayer feathers and meal and leave the kiva.

Provenance: from the estate of Santa Fe dealer and collector Martha (Marti) Struever, who passed away in August 2017. 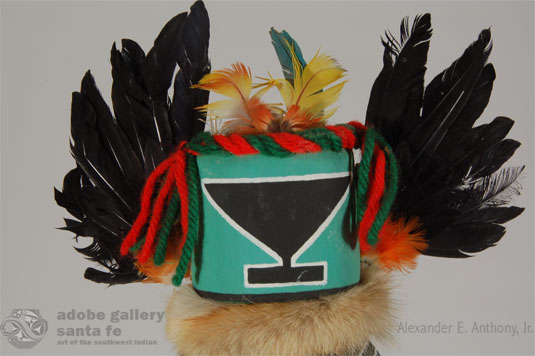