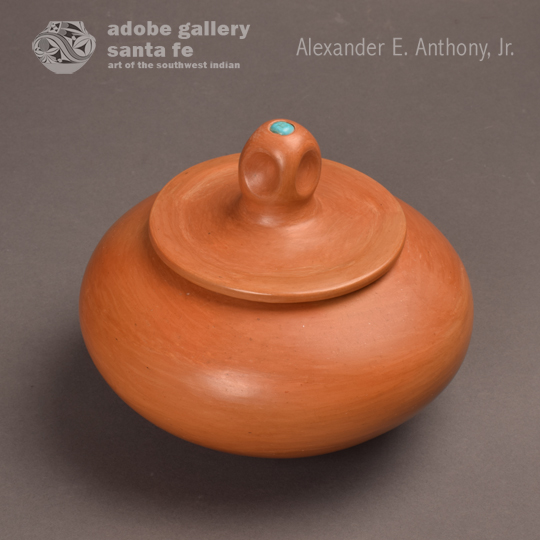 Dextra Quotskuyva Nampeyo was the most innovative potter of the Nampeyo family of Hopi PUeblo. She never hesitated to experiment with form or design. Her craftsmanship was flawless.  She was a favorite of many potters and will be missed by many.

This jar, although atypical of her later works, is typical of her experimental period of the 1980s, the date this jar was purchased by the current owners.  It is a jar without added slip. The clay body was stone polished from its natural state.

Dextra grew up in a household of potters who worked every day, making pottery to sell to tourists, dealers and museums. Her mother was Rachel Namingha and her grandmother was Annie Healing, oldest daughter of Nampeyo of Hano. Nampeyo was still alive when Dextra was born and Dextra got to know her great grandmother for a dozen years before Nampeyo passed away. As a young child, Dextra did what all young girls did—she helped gather and process clay. She later was allowed to fill in designs that were drawn on pottery. This was the learning process for young girls who would be a future generation of potters.

Dextra Quotskuyva Nampeyo (1928- 2019) was encouraged by her mother, Rachel, to produce the traditional Sikyatki designs as other Nampeyo family members were doing. As a respectful daughter, Dextra did what her mother requested. After Rachel passed away in 1985, Dextra then began expanding her repertoire and developed her style of designs with which she would become known for the rest of her career.

This jar could be an early example of Dextra experimenting with new concepts.  The current owners said that they purchased it in the early 1980s and we know that is the time Dextra began expressing her creativity.  The jar is signed Dextra in a scratched-on manner. Perhaps Dextra signed in that manner because she was not using any paint on the design, therefore, probably did not have any pigment handy with which to paint her name.

Provenance: from the collection of a family from New Mexico who purchased it while living in California in the early 1980s.