Nampeyo, Hopi Potter: Her Artistry And Her Legacy [SOLD] 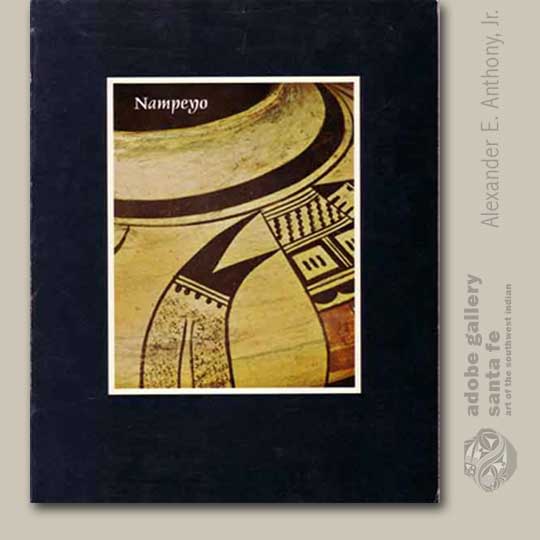 This catalog was published in conjunction with the Nampeyo Show April 19 - May 26, 1974.  This is a very rare catalog. I collected it in 1974 and took it on many trips to the Hopi reservation and had family members autograph it.  Autographs include: Nellie Nampeyo, Fannie Polacca, Rachel Namingha, Dextra Quotskuyva, Camille Quotskuyva Nampeyo, and Rachel S. Nampeyo.

John Collins, initiator of this exhibit and this catalog, was intent on writing a history of the famous and mostly undocumented Hopi potter, Nampeyo.  To do so he felt it important to visit the Hopi reservation, meet members of her family, and collect examples of her pottery. As his collection of Nampeyo’s pottery grew, he decided that an exhibit with numerous examples of her work would be an important milestone to exposing her and her masterful work to the public.  This exhibit at the Muckenthaler Cultural Center in Fullerton, California in 1974 was the result.

It has been my pleasure to follow the development of this display and its attendant catalogue from its inception to fact. John Collins, the initiator of both the exhibition and the catalogue, had been coming to northern Arizona for some time but our paths had not crossed until one day, a year or so ago, when he paused at the Museum of Northern Arizona with a pulled-warp rug to discuss. In the course of our conversation his intense personal interest in all aspects of the arts and crafts of the southwestern Indians became more than apparent.

This interest had been especially piqued by the dearth of a written history about the renowned Hopi potter, Nampeyo, and he had conceived the idea of writing a history of her life. From time to time other individuals had become interested in the phenomenon of Nampeyo's pottery and produced small articles of note but none was a true history of this talented artist such as Collins planned. Given to carrying out ideas he immediately set about collecting the raw material for his history. This of course involved many pleasurable trips to the Hopi reservation and a developing friendship with the numerous descendants of Nampeyo who lived scattered about the base of First Mesa in the town of Polacca. It also brought a growing awareness that the history of a modest Hopi woman, no matter how great her artistry, has little to develop unless it contains in some manner, concrete examples of her ability.

This desire to write a complete history about Nampeyo was compounded by a frustrated desire to collect her pottery. The realization that her history would be incomplete without being able to see her masterpieces brought about the concept of a show and catalogue. In addition there was the urgent desire to have as much of Nampeyo's magnificent pottery as possible in one location where it could be seen and admired by the many people who shared his interest.

Last year this desire took concrete form with the application for a grant from the National Endowment for the Arts. Upon receipt of this grant the hunt began in earnest. Collins' search for Nampeyo's magnificent pottery led him from national to local museums, to research collections, from private collectors to shops and families having either an heirloom or a white elephant stored in their attics. In an ever-broadening sweep more and more of Nampeyo's pottery was discovered and each find was carefully recorded and measured and noted for its niche in the forthcoming show.

All of those who view the display at the Muckenthaler Center will be enriched by the beauty of Nampeyo's art but undoubtedly the one who will receive the most benefit will be John Collins, whose efforts to share his appreciation of Indian crafts with his neighbors have led to both catalogue and show.