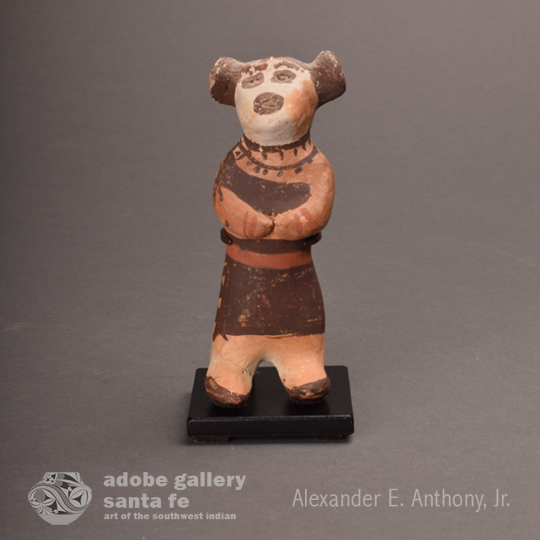 Pottery figurines such as this one of an unmarried Hopi girl were most likely made by the Hopi-Tewa potters at the suggestion of trader Thomas Keam.  He was instrumental in guiding the women potters to make items he thought would appeal to tourists and even to museum curators. Since the unmarried Hopi girls had their hair put up in elaborate whorls, unlike any other people in the world, he obviously considered that a figurine in that likeness would appeal to visitors who had seen such a young girl at the pueblo.

This figurine dates to the period of the late 1800s to early 1900s.  The figurine is dressed in traditional pueblo clothing as would be seen on such young girls.  It is provided with a stand for display purposes.

Condition: this Hopi-Tewa Pottery Figurine of an Unmarried Girl is in excellent condition

Provenance: from a major private collection of Hopi and Hopi-Tewa articles.