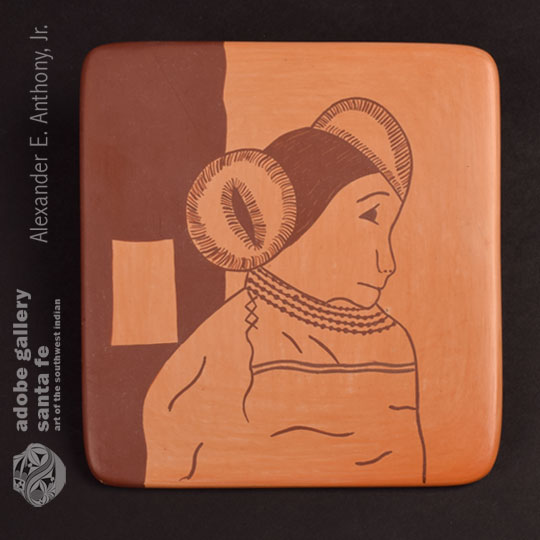 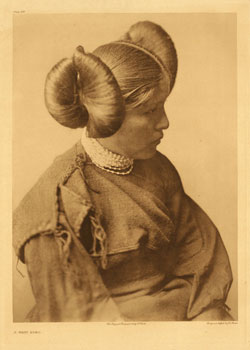 The image on this Hopi Tewa pottery tile by Mark Tahbo was inspired by a historic photograph of a Hopi maiden taken by Edward S. Curtis Curtis.  Images of unmarried Hopi maidens were among the many photographs taken by Edward S. Curtis at the end of the 19th Century. Curtis was intent on documenting Native American culture and spent decades traveling the United States and photographing Native people. Curtis took more than 40,000 photographs in his lifetime.

The squash blossom whorls are unique to the Hopi of Arizona. The maiden on the tile has the distinctive hair whorls which identify her as unmarried. At Hopi, only the unmarried woman wore the hairstyle. Mark Tahbo shared with us that he painted the maiden in the style of the time, with a somber, serious look. Behind the maiden, the artist painted a wall with a window as an added feature, as if she were looking over the Hopi Mesas.   The image was presented in monochromatic tone to simulate the tone of Curtis’s photographs.

The source of this iconic Edward Curtis image of a Hopi Maiden Source is unknown but found in the Public Domain.

Provenance: this Hopi-Tewa Pottery Tile of Iconic Hopi Maiden Image by Mark Tahbo  is from the artist