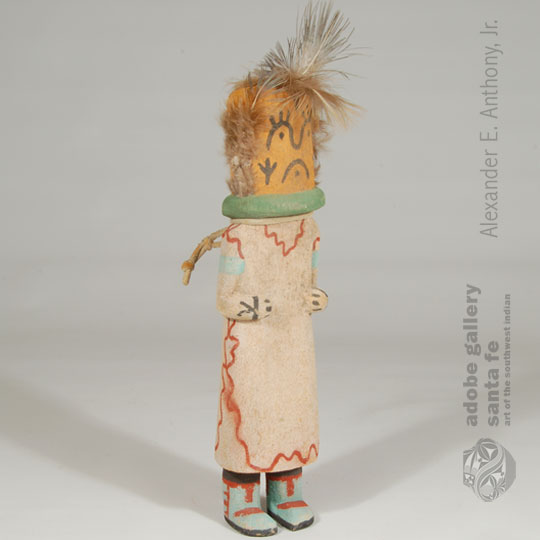 Representation of Katsinas differs at different Mesas.  At Third Mesa villages, Qöqöle wears old Anglo clothing.  At the Second Mesa, he wears the traditional buckskin clothing.  The Third Mesa Qöqöle may have worn buckskin in the distant past, but no longer.

Third Mesa is the only place where Qöqöle appears during Soyal.  He comes in a large group of Qöqöle and their manas, on the last day of the ceremony. Combining ritual with pleasure they burlesque other ceremonies while at the same time managing to “open” the kivas.  It is possible that at one moment the katsina may be very seriously marking the four sides of the kivas to allow the other katsinas to come and visit the village, and at the next moment be kneeling on the ground to shoot marbles.  Frequently they imitate the women’s dances of the preceding fall.

The Hopi Pueblo Qöqöle Katsina may appear with a black face with blue markings, although he can appear in any color because he is a directional katsina.  His face can be any of the colors of the six directions.  In this carving, he has a yellow face with black markings.

This is a pre-1950 carving, a period before the use of acrylic paints.  The elongated body, hands tucked to the body, and water-based paints would indicate a circa 1940s carving.

Provenance: this Hopi Traditional Qöqöle Katsina Doll is from the extensive collection of an Oklahoma family.