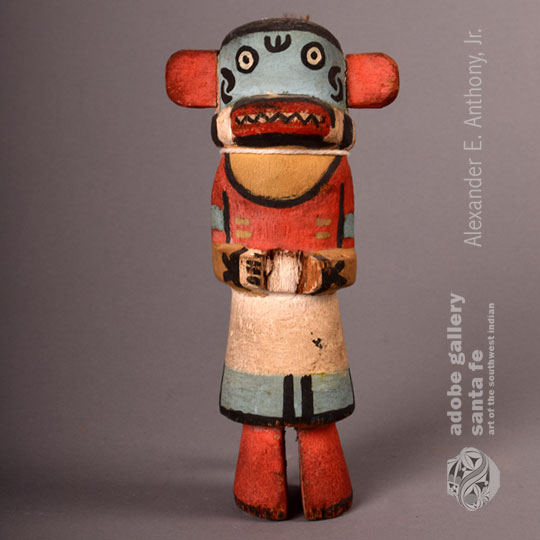 It is recognized that older Hopi Pueblo men were not comfortable carving katsina dolls, for sale, in the same detail as they would appear when made for Hopi traditional use as gifts from the katsinas to the female Hopi.  Yet, there was the temptation to join in the economic benefits of making dolls to be sold to collectors. A solution many carvers arrived at was to carve a katsina doll but not completely accurately depicting a katsina.

This is most likely a doll of this nature, one carved by a Hopi who was uncomfortable making an accurate representation of an existing katsina.  This one has a mouth of the style of an Ogre Katsina, but no other features that would define it as such. It is probably best to say that it is a doll carved in the mid- or early-20th century to be sold to a visitor to the village. It is a charming small carving with all appearances of a representation of a true katsina.

There is no stigma to be attached to such a carving.  There are probably more of this style on the market, from the early- and mid-20th century, than one would expect.  Wilson Tawaquaptewa is an excellent example of a carver whose dolls are not true representations yet are very collectible and not inexpensive.

Condition: this Hopi Pueblo Unidentified Katsina - Possibly Ogre Kachina Doll is in very good condition with some loss of the left hand on the doll

Provenance: from the estate of Santa Fe collector and dealer, Martha (Marti) Struever, who passed away in August 2017.