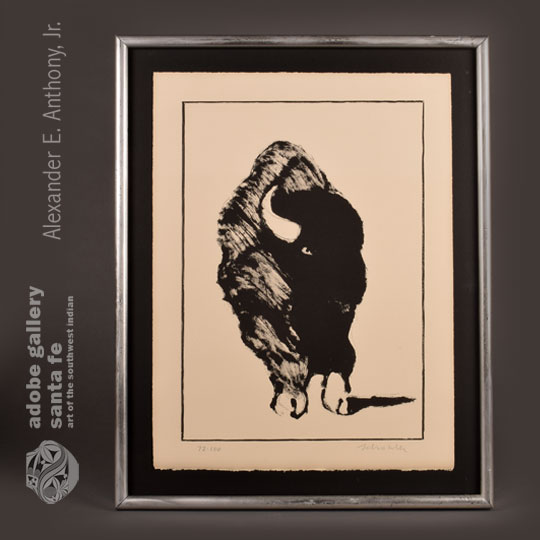 The Buffalo has long been associated with the Native American experience. In this lithograph, Scholder has rendered an image that has an almost human look in its eyes.  It is a strong, striking image, made even more powerful by its single color: black. The buffalo is framed by a black rectangle. Outside of the rectangle, the lithograph is signed, numbered, and stamped with the artist’s and printer’s chop marks.

The lithograph was executed at Tamarind Institute, the renowned lithography workshop in Albuquerque that is affiliated with the University of New Mexico. This is number 72 of an edition of 100.  This piece is featured on page 136 of Clinton Adams’ Fritz Scholder Lithographs.  It was produced in one color and completed in February 1975 in an edition of 100.   It is mounted so that the entire image is visible, on a black backing within a silver frame.

Although one-quarter Luiseño, Fritz Scholder didn’t consider himself Native American.  It was only after he began teaching Native American students at Santa Fe’s Institute of American Indian Arts that he began to explore his own connection to his ethnicity.  Raised in the upper Midwest, Scholder was fortunate to have famous artist Oscar Howe as a teacher while in high school. Howe recognized Scholder’s talent and encouraged him to continue a career in art.  Scholder went on to study in California and obtain a Master’s degree at the University of Arizona in Tucson.

After receiving his degree in Arizona, Scholder came to Santa Fe.  As a faculty member at IAIA, he encouraged his students to recognize their heritage, and to reexamine the common Indian stereotypes of the time. In doing so, he asked them to treat their Indian subjects as individuals, not as the romanticized, noble savages that were frequently depicted in artworks.

It was in Santa Fe that Fritz Scholder began to reexamine his connection to his Indian heritage. He began attending pueblo dances and collecting Indian artworks.  Within his own creative practice, he began to deconstruct what was considered traditional Native iconography and represent the modern Indian experience in a series of complex images. Some were humorous, others were serious. He examined the modern Indian experience in a new way, a way that has had a lasting impression on art students and collectors ever since.

Condition: the Iconic "The Buffalo" Lithograph by Luiseño Artist Fritz Scholder is in excellent condition