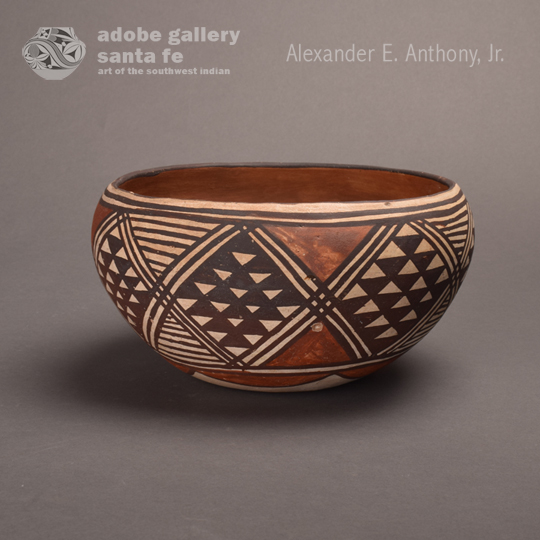 This bowl is typical of Isleta Polychrome pottery from 1880 to the present.  At that time, Isleta potters learned new techniques and new designs to replace the traditional orange wares that were devoid of design.  The poor quality red clay at Isleta was not suitable for making high-quality thin-walled pottery.  Pottery from Isleta of that time is not in large quantity in any museum collection because it was not considered worthy of such.  When one looks at it today, however, it is amazingly beautiful in its color purity and simplicity.

The change occurred in 1880 when a large group of Laguna Pueblo Indians permanently moved and set up a village near Isleta which they named Oraibi.  The massive move was a result of a dispute within Laguna.  The Laguna women were makers of polychrome pottery and they took the techniques and designs with them.  Not only were the designs and colors attractive to potters at Isleta, the Laguna potters knew how to use proper temper to achieve strong and thin walls.  Eventually, the Laguna style became the Isleta style and Laguna designs still appear today on pottery from Isleta.

It was this new style of pottery that Isleta women hauled to the train station in Albuquerque every day to sell to tourists traveling the *Atchison Topeka and Santa Fe (AT&SF) Rail Line from Chicago to California and return.  It is the style seen on this serving bowl which quite possibly dates to as early as 1920s.  This bowl appears to have been used prior to being sold.  There is residue stain on the lower half of the interior of the bowl.

Recommended Reading:  Pueblo Pottery of the New Mexico Indians: Ever Constant, Ever Changing by Betty Toulouse ISLETA PUEBLO and the Church of St. Augustine [SOLD]
by