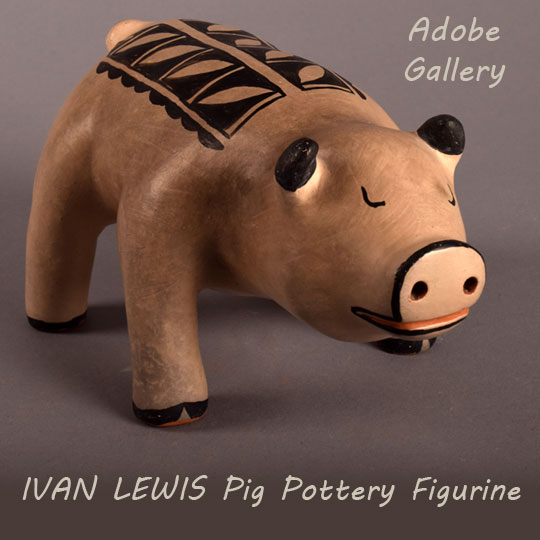 This figurine of a pig by artist Ivan Lewis is a little unusual in the pantheon of pottery figurines made at Cochiti Pueblo.  For hundreds of years, the people depended on hunting as a source of food and, in line with their beliefs, they asked the animals to sacrifice their lives for food for the Indians.   They did not take the life of the animal without sacrificial offerings and prayers.  Their plea to the animals was for them to give their life, not for the Indians to take their life.

Their respect for animals was passed to their children through stories that were sometimes illustrated with figurines of the animals being discussed, usually of hunting animals.  This was their way to insure the children had the same respect for the animals as did the adults.

It is not likely that pigs were among the hunt animals of the people. This figurine was made to please a buyer and it succeeded in doing so.  Adobe Gallery purchased this from Lewis in January 1983 and sold it to the client from whom we now have it back.  It is signed with the artist’s name and is in original condition.