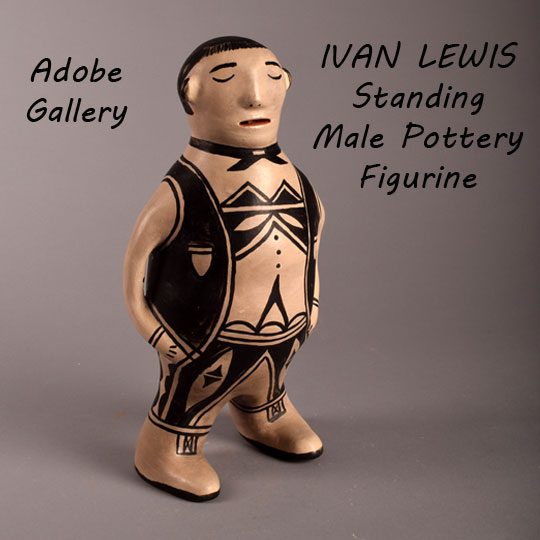 Ivan Lewis created a figurine in the style of the circa 1880s Cochiti Pueblo pottery figurines, mocking opera singers, circus people, Spanish merchants, and any other sort of Non-Indian person or personality.  This man is wearing a vest that is open in the front, leaving a clear view of his shirt.  His trousers and shirt are exquisitely designed with geometric elements.  The back of his vest is designed with two stepped elements containing a leaf and zigzag designs.  He has on a pair of white shoes with large laces. He appears to be a financially successful non-Indian male with no definition to what Lewis was aiming for.

Ivan Lewis (1919-2001) was the son of famous Acoma Pueblo porter Lucy Lewis.  Ivan married Rita Banada from Cochiti Pueblo and moved to Cochiti where he spent the remainder of his life.  Rita taught Ivan the techniques of pottery making so he produced works in the style of Cochiti Pueblo.  He was a worker at building the Cochiti dam for a dozen years in the mid-1960 to mid-1970s.  It was after that diversion that he began making pottery in earnest.  Figures like this standing male began to appear in his pottery in the 1980s.  This figure was made by Lewis alone and is signed with his name.

This figurine was purchased from Ivan Lewis in April 1982 and sold to the client from whom we now have it back.