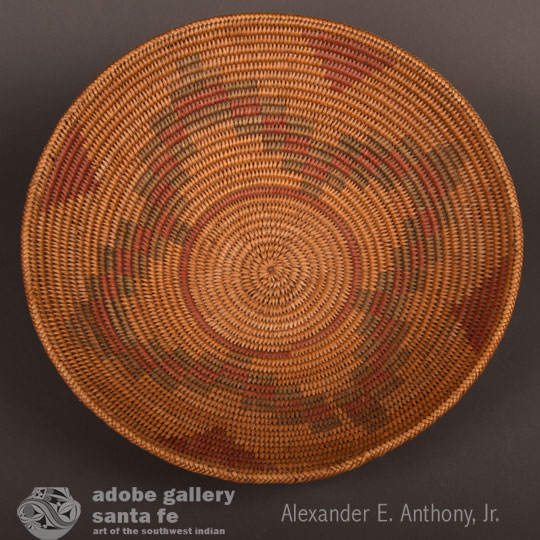 This is a very large basket from a member of the Jicarilla Apache Tribe of Northern New Mexico.  The Jicarilla women made baskets of this scale for their own use in their daily household chores.  The Jicarilla Apache Reservation is in the northern part of central New Mexico. The name Jicarilla comes from the Spanish word for “little basket.” When the Spaniards arrived, in what is now New Mexico, they were impressed by the small pitch-covered baskets which the Jicarilla used for holding drinking water. These small baskets were tightly woven and covered with piñon pitch to make them waterproof.

Fine basket weaving had been a Jicarilla tradition for centuries but the quality and beauty of the baskets was not well-recognized until the 1950s, when traders of the area began to enter the baskets in the Gallup Inter-tribal Indian Ceremonial.

The Jicarilla basket makers used commercial dyes for designs and those colors generally faded over the years from constant abrasion while in use and also from sun fading when exposed.  This basket has retained its colors beautifully. It apparently was used sparingly and kept from sun exposure.