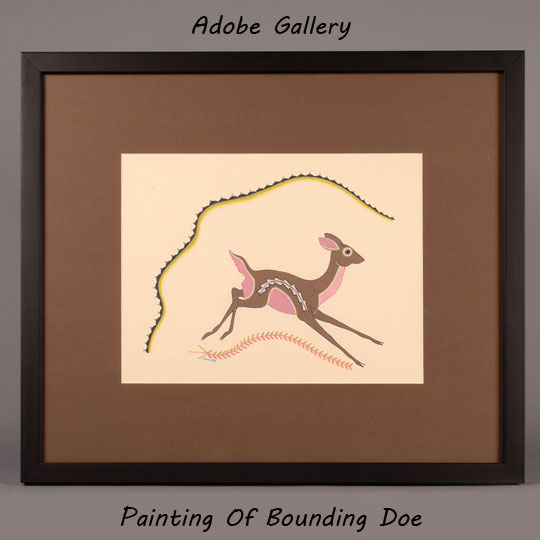 This is only the third painting Adobe Gallery has seen from San Ildefonso Pueblo artist John Martinez. His work is very rare.  The painting features a bounding doe, either running away from something or just playfully running.

A flowing ribbon of rainclouds frames the upper portion of the scene, in rainbow like fashion, and has been painted in the artist’s style.  Below, the earth is referenced with a similar ribbon of foliage, with the artist signature attached as, “John-52”.  The simplicity and movement evoked in this painting remind us of not only the artist’s inherited tallent, but also his penchant for original creation.

Maria and Julian Martinez had four sons:  Adam, born in 1903; John in 1915; Popovi Da in 1922; and Phillip in 1925.  There is very little information published on John and Phillip except a few statements made by Maria, published in Richard Spivey's book The Legacy of Maria Poveka Martinez.

John Martinez (1915-) was in the Army during World War II and so was his brother, Phillip.  John is listed as being a road engineer and an engineering draftsman.  That is likely the reason he painted so few paintings. There seems to be no other information on John.

Condition: there are two light lines marking the cream background of this painting, but the image is unharmed. This painting is in very good condition

Provenance: this John Martinez Original Pueblo Painting Of Bounding Doe is from a private collection