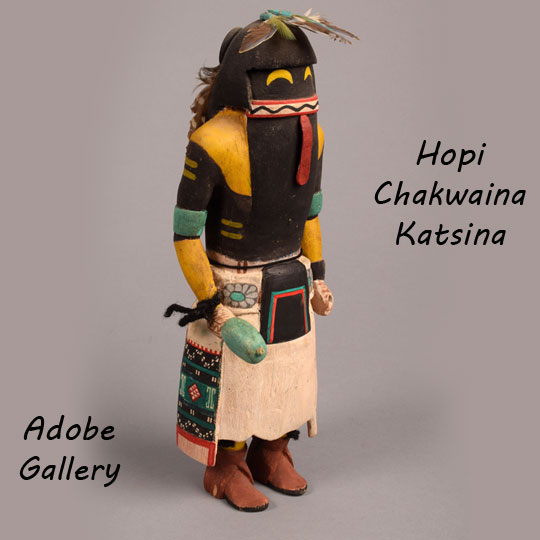 This exquisite version of Chakwaina Katsina was beautifully carved and painted.  He has the long body of earlier katsina carvings.  His arms, separated from his body, hang loosely next to his body.  He wears a white skirt over which is a short loin cloth.  On his right side hangs the traditional embroidered sash.  He wears a painted concho belt.  In his right hand is a rattle.  In his left hand should be a bow, but it is not available.  He has an excellent display of feathers on his head and suspended on the back of his head.  The doll appears to be from the 1940s.

Chakwaina appears most often in January during the Kiva Dances, dancing in a line with lively gestures, stooping and turning and singing a spirited tune.  It has been said that Chakwaina represents Estevan the Moor, who led Fray Marcos de Niza in search of Cibola and was killed at Zuni. Barton Wright, the noted Katsina expert, said this is not likely because Chakwaina originally came from the Rio Grande Pueblos, migrated to Zuni, then to Hopi from Zuni.

Chakwaina appears at Hopi, Zuni and *Keresan Pueblos but not in New Mexico Tewa Pueblo ceremonies. Chakwaina is a warrior of great repute.

Alph Secakuku, in his book referenced below, calls an older version of this Tsa’kwynakatsina, and this later version as a side dancer to it.  He states that Tsa’kwynakatsina is a Warrior, appearing during Powamuya ceremony and Angk’wa, the spirit of which represents cold moisture.

*Keres: the language spoken by the Puebloan people of Acoma, Cochiti, Laguna, San Felipe, Santa Ana, Santo Domingo, and Zia Pueblos are so closely related that linguists usually consider them dialects of a single language, known as Keres or Keresan.

Condition: very good condition for its age.  Right wrist has been broken and glued.

Provenance: this Beautifully Carved Hopi Pueblo Chakwaina Katsina Doll is from the collection of a gentleman from California