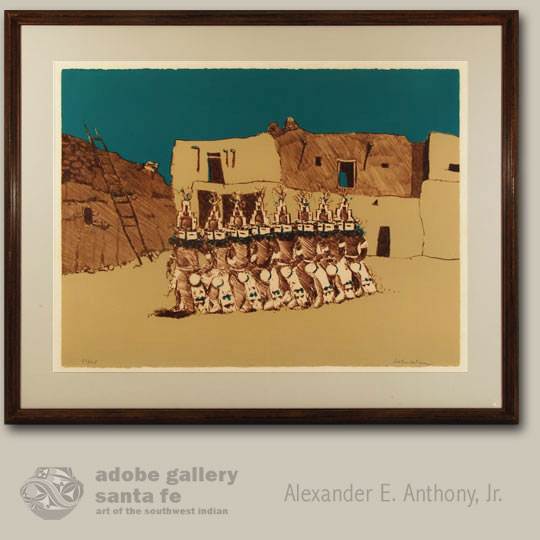 Fritz Scholder was a world-renowned painter of Luiseño descent.  Scholder, who at one point had vowed never to create works with Native themes or subject matter, became a widely influential figure in the world of Native American art.  His Indians Forever Suite, created at Albuquerque’s Tamarind Institute in the early 1970s, was the beginning of Scholder’s experimentation with lithography.

In “Kachina Dancers”, Scholder presents a straightforward depiction of a ceremony that is of the utmost importance to the Hopi people: the Niman Ceremony, or Going Home Ceremony.  This ceremony marks the end of the six-month period during which, according to Hopi tradition, the Katsinas live among the Hopi people, revealing themselves through ceremonial dances and serving as the Hopi people’s links to their gods. The katsinas pictured here are called Hemis Katsinas.

Of the eight images that comprise Scholder’s Indians Forever suite, “Kachina Dancers” is the most traditionally Native American in subject matter and execution.  It is neither humorous nor ironic. Fritz Scholder (1937-2005) uses just three colors—ochre, sienna, and a rich blue-green—to create a fairly detailed depiction of eight Hemis kachinas dancing in line. Were they seen in profile and without the surrounding pueblo buildings, we’d have a traditional pueblo flat-style piece.

This lithograph, which is included on page 11 of Clinton Adams’ Fritz Scholder Lithographs, was produced in three colors and completed in January 1971 in an edition of 75 copies.  This is #58 of 75.  It is framed beautifully in a dark brown wooden frame and mounted with its edges exposed. The lithograph was executed at Tamarind Institute, the renowned lithography workshop in Albuquerque that is affiliated with the University of New Mexico.