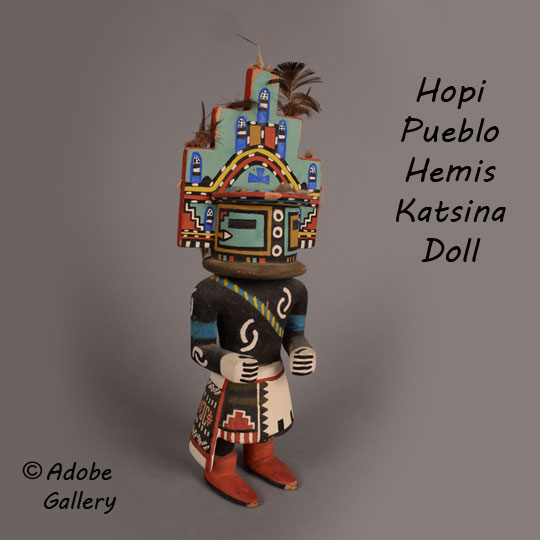 This is an exemplary carving of the Hopi Pueblo Hemis Katsina. Except for feathers, it is an all-wood carving and appears to be from the 1950s. At times, some carvers do not make the mask large enough to simulate that it is an extra piece worn over the head of the impersonator. This one is truly to the correct scale. The mask and tableta were beautifully painted. The tableta is adorned with phallic symbols to indicate its fertility significance—fertility for crops, for animals, and for humans. An arched rainbow is painted on the tablita over the top of the head of the katsina.

Below the mask is a carved green arrangement representing an evergreen ruff. The body of the katsina is painted with black corn smut with light colored half-moons on the chest and back.

The Hopi live in a desert and rely solely on rain for their crops and animals. It is to the katsinas that the Hopi plead for rain. In exchange for rain from the katsinas, the Hopi present them with pahos (prayer feathers). They do not ask for anything from the katsinas without giving something in return.

Although the Hemis Katsina may appear in any katsina dance, they are best known for their participation in the Niman Ceremony, a ceremony where many Hemis and Hemismana are the only katsinas represented. The Hemis Katsina is most frequently selected for the Niman because he is a beautiful impersonator, and his songs are popular with the Hopi.

The Niman or Home Ceremony performance, given shortly after the summer solstice, is the ceremony that closes the katsina season. The date of the Niman ceremony is set when the sun reaches its northernmost point.

Condition: very good condition with the exception of the feathers.

Provenance: this Hopi Pueblo Hemis Katsina Doll, circa 1950s is from the collection of a client from California