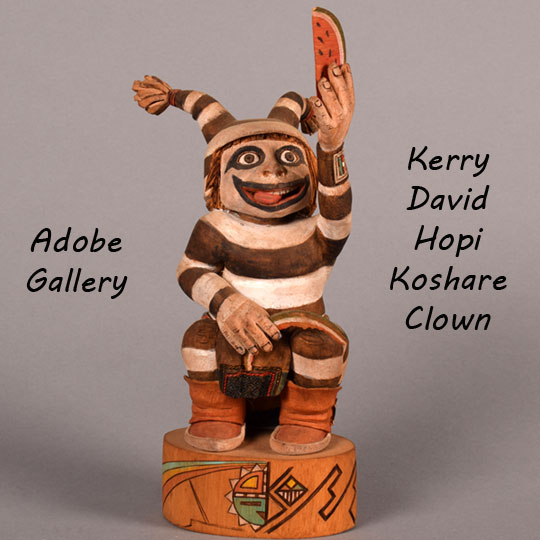 This Koshare Clown carving by Hopi Pueblo artist Kerry David is magnificent and charming.  He is squatting and has an already eaten watermelon slice in his right hand and is holding up his left hand with a yet uneaten slice.  The anticipation of the delight to come when eating the second slice is beautifully expressed in his face.  His eyes are wide open, and his tongue is licking his lip.

The clown wears a loin cloth draped in front and back.  The back side is covered in a black blanket.  He wears traditional moccasins with silver and turquoise clasps.  He wears his hair in a chonga on the back, with loose hair flowing from under his cap.  He is wearing a ketoh on his left wrist. The doll is mounted on a 1-¼-inch pedestal on which the carver decorated the front with a painted partial sun face with other symbols surrounding it.  The underside of the pedestal is signed “Carved by Kerry David.”

Kerry David (b.1963) is of mixed heritage.  His mother is Diné of the Navajo Nation and his father, Les David, is a Hopi from First Mesa. Kerry is a nephew of Neil David, Sr. He was born in 1963 at Walpi village at First Mesa.  He started carving katsina dolls when he was 7 years old.

Provenance: from the collection of a client from New York who purchased it in the 1990s.