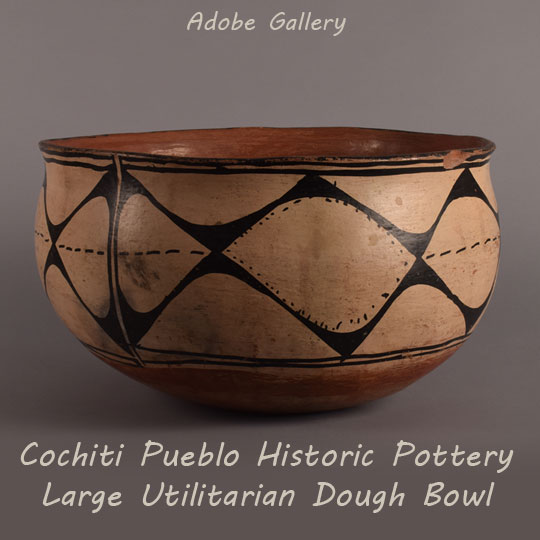 Well-crafted and beautifully-decorated pottery has always been part of the pueblo aesthetic.  It was not until the late 19th century that potters started adhering to the unfamiliar tastes of the Western eye.  It was of necessity to do this in order to make a sale.  This has not changed even today.  Potters produce what they know will sell to the non-Indian market.

This dough bowl, however, speaks loudly of the pueblo aesthetic.  It was made for, designed by and used by a pueblo potter.  It was made in the vessel shape that was needed for a particular use and designed with a traditional Kewa Pueblo design which could have been passed down in the same family of potters for decades.  It is because of these reasons that this bowl becomes such a collectible treasure.  It was beautifully shaped and expertly painted.  It is possible that it may have been used for several decades before leaving the pueblo.

When we are able to understand that the Puebloan view pottery as a creation from the earth and each has a life then we will see the beauty in a vessel that may not pass muster to a collector of pristine contemporary pottery.  The materials come from Mother Earth and it is from her that the pueblo person is able to sustain life because she has given the materials necessary for survival.  Pottery has a family attachment but also a communal aspect.  Pottery is used in secular and ceremonial functions and in the latter draws the individuals of the pueblo together as a community.

One cannot look at this bowl without seeing the loving hands of the potter who brought it to life.  She gathered the clay, worked it for days or weeks in preparation for use, hand coiled the bowl to the desired shape, sanded and applied the slip and then carefully applied the black guaco design of her choice.  One has to wonder if the black dots and dashes have some significance.  After firing the vessel, she and her family used it for decades.  It is this love she poured into this bowl that shines through with such a beautiful patina.

As is traditional at Kewa Pueblo, the interior of the bowl has stone-polished red slip, a black rim (which has been worn from constant use), double framing lines above and below the painted area with ceremonial line breaks, and a wide wiped-on red slip under the painted area.  It probably dates to circa 1910.

Condition:  very good with one small rim chip on the exterior.