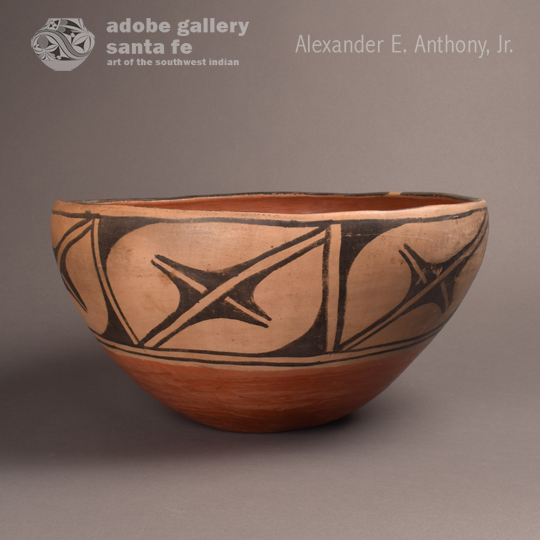 The most prominent designs associated with Santo Domingo Pueblo are large areas of exposed cream slip, boxed into sections, and then trimmed around the edges in black pigment.  Occasionally, as on this bowl, a design is prominently displayed on the cream area. Each potter may treat such a pattern slightly different, but overall, it comes out appearing quite the same.

The artist created large rectangular sections, outlined in black, filled the upper left and lower right corners with black pigment and placed a pair of mirror image designs in a diagonal fashion within the box.  The rim was painted black and a pair of framing lines placed below the design section. The underbody was stone polished with red slip.

The slight incurved rim is a technique that strengthens the vessel wall.  It also provides a surface for scraping dough from one's hands and having it fall into the bowl rather than outside the bowl.  There is a nice fire cloud on one part of the design.