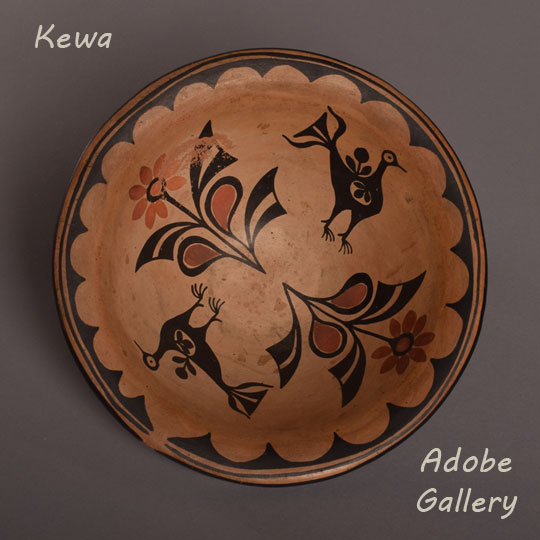 Frequently an item of Historic Southwest Indian Pottery become available that is well above average.  This Kewa Pueblo Polychrome Pictorial Pottery Serving Bowl is small but powerful in shape and design. The small flat base expands outward gracefully and then abruptly flattens out at the rim as if opening the design to the fullest view.

A pair of Kewa Pueblo black birds and a pair of flowers in red and black fill the interior of the bowl.  Around the flat rim is a scallop design in black that is enclosed in a black framing line and then a black rim.  A ceremonial line break cuts through those three bands. The patina of the cream slip is indicative of a circa 1920s-30s period.  The exterior design is a floral vine that flows around the entire bowl. It is framed by a pair of black lines under the rim edge and just above the red band on the bottom.

The bowl is most attractive and the designs were put on with precision.

Condition: very good condition with some loss of slip on one of the interior flowers

Provenance: this Kewa Pueblo Polychrome Pictorial Pottery Serving Bowl is from the collection of a gentleman from Albuquerque