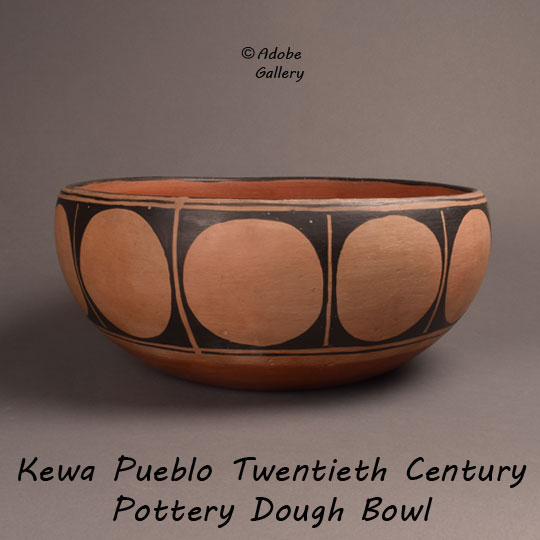 The pueblo potters have traditionally stayed with design patterns used by their mothers and grandmothers and rarely deviated from that policy, including Santo Domingo Pueblo.  It is not unexpected that this bowl from the mid twentieth century would feature a very traditional Santo Domingo design of a series of cream circles created by outlining the surrounding area in black pigment.  Between each circle is a vertical line that essentially sets each circle in a box.

In 2009, Santo Domingo Pueblo's tribal council decided to change the pueblo's name back to the ancestral name Kewa Pueblo (pronounced KEE-wah).  Although the pueblo name is Kewa, there has been no change in pottery designation: it still retains the name Santo Domingo Polychrome.

This design is simple and one of the most desired by collectors.  It represents the clean and uncluttered concept prevalent at Santo Domingo in the early 20th century.  The circle elements on the body are bold and strong and that is their appeal.