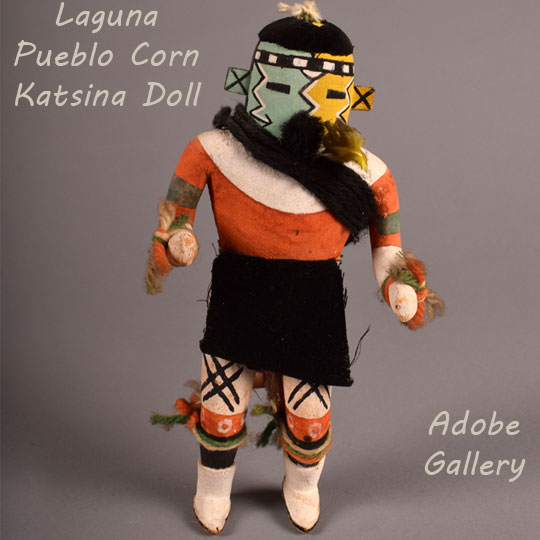 This Corn Katsina from Laguna Pueblo is quite similar to the Laguna Corn Dancer at Hopi but is distinguished by several body markings that appear on the Laguna version and not on the Hopi version. The cross-hatch marks on each leg do not appear on the Hopi version, nor does the sun face on the back of the head.  Both these markings are unique to the Laguna Pueblo katsina  The painted face is divided into two colors—turquoise and yellow, with each half having zigzag lightning marks.

Making clothing for the dolls at Laguna is like the manner at Zuni, but not Hopi. The painted sash under the black loin cloth on the back of the dancer is painted fabric.

Interestingly, the top of the head was painted and then covered with black fabric, leaving a cutout to secure feathers (which are missing).  The mouth was made of black yarn, there is a bandolier across the chest made from black yarn, and a loin cloth of black fabric hangs in front and back.  Yarn of mixed colors are wrapped around both wrists and both calves.

It may seem a little unusual that Laguna Pueblo will permit katsina dolls to be carved and sold to outsiders, when other New Mexico pueblos, except for Zuni, do not permit such.  The likely reason is that Laguna is a pueblo founded in 1699, following the Pueblo Revolt of 1680 and reconquest 12 years later, making it the most recent of the New Mexican pueblos.  Archaeological excavations, however, have shown that people have inhabited the area ranging from 6500 B.C. to the present.  Members of Acoma and Zuni Pueblo were some of the recent settlers, so perhaps the tradition of selling katsina dolls by the Zuni was passed on to Laguna.  The people of Laguna Pueblo speak Western Keresan.

This doll is not signed with the name of the maker.  It will not stand independently and must be hung from the string provided.

Condition: this Laguna Pueblo Corn Katsina Doll, circa 1950s is in very good condition for its age

Provenance: acquired in 2009 from an Albuquerque resident, sold to a client from whom we now have it back to sell again.