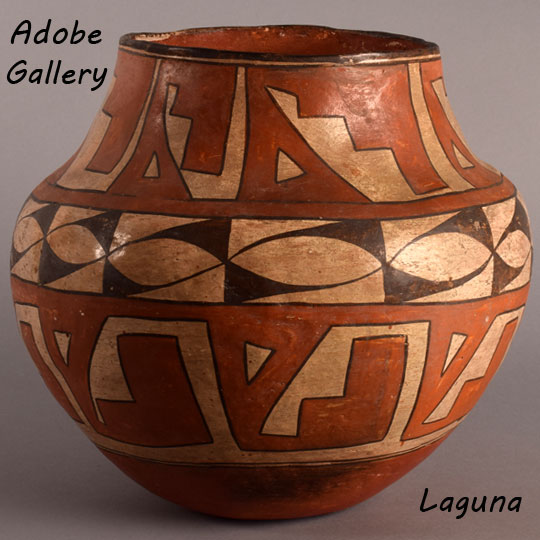 This spectacular circa 1900 historic polychrome pottery jar from a talented, but unknown to us, Laguna Pueblo potter is bold in orange design with minimum black elements.  The long and graceful neck is beautifully filled with triangular and stepped elements that are repeated in the area below the mid-body.  A band of wavy sinusoidal waves encircles the mid-section and divides the upper and lower orange geometrics. The interior of the neck is painted in orange slip, and the lower body in polished orange slip.

The jar is accompanied by a letter from the esteemed Edwin L. Wade, Ph.D., which is quoted below.

“Acoma and Laguna Pueblo pottery are often indistinguishable, which is logical, because in 1699 a portion of Acoma’s population left the community in fear of military reprisals from the Spanish in revenge for the Pueblo revolt of 1680.  This group started a new Pueblo, referred to as Laguna, and their certain historic Laguna potters evolved their own style unique to this Pueblo.  This large dynamically designed jar shown below is one of those.

“Unlike the finely painted linework, birds, and vegetation characteristic of turn of the 20th century Acoma ‘railroad’ tourist ceramics, this jar’s composition features massive geometric motifs in stacked bands.  It also presents the pumpkin orange paint seen on a number of such Laguna vessels.

“At the hand of a less skilled potter, this design system could easily become ponderous, but not so with this jar. There is movement and horizontal flow to the composition as with a punctuated drumbeat vibrating the air.”

Condition: good condition with a stabilized hairline crack and some surface abrasions

Provenance: this Laguna Pueblo Historic Pottery Polychrome Water Jar, c.1900 is  from the collection of a client from Kansas