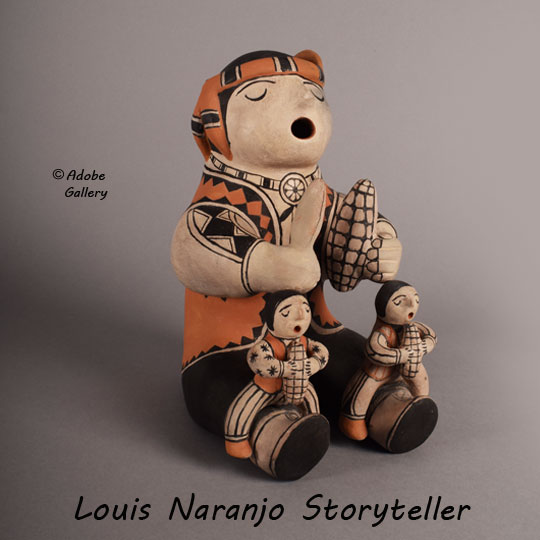 This storyteller figurine was created by Cochiti Pueblo artist Louis Naranjo. This charming example of Naranjo's work is similar to a traditional storyteller, with a few personalized touches. Naranjo is known for creating inventive depictions of a wide variety of figures, and all are worthwhile, but it's a treat to see a storyteller figurine like this one.

The figure sits in the typical position, with his eyes closed and his mouth open. His clothing is depicted in detail, with a patterned vest standing out as particularly appealing. On the back of the vest, a stylized moth design appears. The primary figure holds an ear of corn, as do both children who sit on his legs. The orange pigment is bright and beautiful, as is the black, which is made from the wild spinach plant that is native to the artist's region. Louis Naranjo's work with this storyteller was excellent.

The bottom of the figurine is signed Louis Naranjo, Cochiti N.M.

Louis Naranjo (1932 - 1997) was born at Cochiti Pueblo in New Mexico. He learned pottery making from his mother Frances Suina and his wife Virginia Naranjo. Louis began making pottery later than most artists, after Virginia suffered a stroke. Louis and Virginia were standard bearers for the proud figurative pottery tradition of Cochiti Pueblo. They crafted their figurines at their kitchen table in their comfortable adobe home at the pueblo. They worked almost every day crafting their art with great care, joking, and exchanging the gossip of the day as they went along, accompanied by television, children, and grandchildren. Their art provided a good life for them and it provided a legacy that will be with us for another century or more. Louis and Virginia had a wonderful sense of humor. They fashioned figurines in clay of bikini-clad men and women with cameras dangling from their necks, mermaids, men with baseball caps, Santa Claus, and many other characters. Also, they crafted angels, storytellers, padres, and Pueblo Dancers.

Condition: good condition, one child was dislodged and reattached by a professional restoration artist

Provenance: this Louis Naranjo Storyteller with Corn and Two Children is from a private New Mexico collection