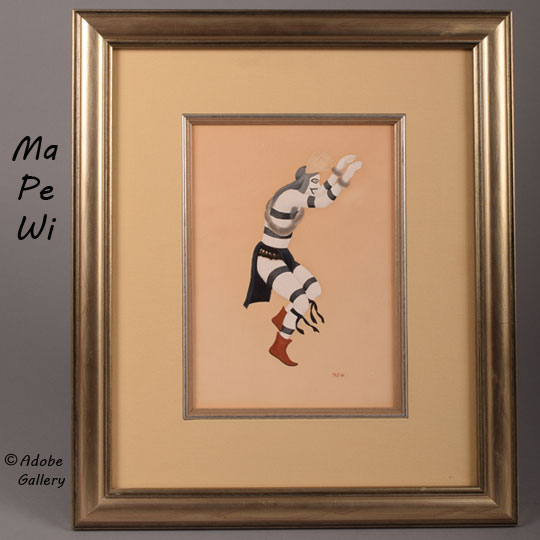 This original painting of a pueblo Koosa Clown was created by Velino Herrera of Zia Pueblo. Herrera—or Ma Pe Wi, as he is known by many—is highly regarded by collectors of early Native paintings. This excellent piece reminds us why Herrera’s work remains so popular among collectors. His work is consistently excellent on a technical level, and each piece feels unique and interesting, even when depicting a common scene or subject.

This depiction of a Koosa Clown is a fine example of Herrera’s ability to breathe life into any common figure or scene. The Koosa, of course, participates in many pueblo ceremonies, so we see him appear frequently in pueblo artwork. Herrera’s version is refined and beautiful, using just a few different tones to form a body with depth, dimension, and realistic movement. This piece is simple in composition and excellent in execution.

The painting is signed Ma Pe Wi in lower right. It is framed beautifully with museum protective glass and archival-quality materials.

Velino Shije Herrera (1902-1973) Ma Pe Wi (Oriole) was a Zia Pueblo painter who is regarded as one of the earliest known Rio Grande pueblo painters.  Crescencio Martinez of San Ildefonso Pueblo was, by most accounts, the earliest of the pueblo easel artists. Martinez passed away in 1918, long before pueblo easel art was recognized as existing.  He was followed by four young pueblo men who essentially constitute the first Pueblo artists to produce paintings for sale. The four were Martinez's nephew Awa Tsireh, Hopi artists Fred Kabotie and Otis Polelonema, and Velino Herrera.  These artists became very productive around 1918, feeding off each other's enthusiasm. Dr. Edgar Lee Hewitt, Director of the Museum of New Mexico, arranged for the four young men to work at the museum in 1920. Famous New Mexicans Alice Corbin Henderson, Mary Austin, and Mabel Dodge Luhan were instrumental in finding outlets for the works of these artists.  They purchased their paintings and found others to purchase them as well.

By the time he was 20 years old, Herrera’s painting technique had improved tremendously, and his works showed great confidence and control.  He was applying colors in complementary tones and could exhibit perspective in his works. Ethnographic accuracy was important to Herrera, and his paintings were strong in that regard.  Clara Lee Tanner’s Southwest Indian Painting: A Changing Art praised Herrera’s skill and versatility: “Watercolor, Shiva, tempera and oils, all have been mastered by Velino Herrera.  He has painted murals in homes and in public buildings; mention should be made of his fine work in the Department of the Interior, Washington, D.C.  His work is done in a flat style, or with a little shading, or in full perspective. Full realism to abstract painting was developed by Ma-Pe-Wi, frequently the two styles appear in the same picture.” Today, his paintings are .... quite collectible, because of both historical significance and the exceptional quality of work.