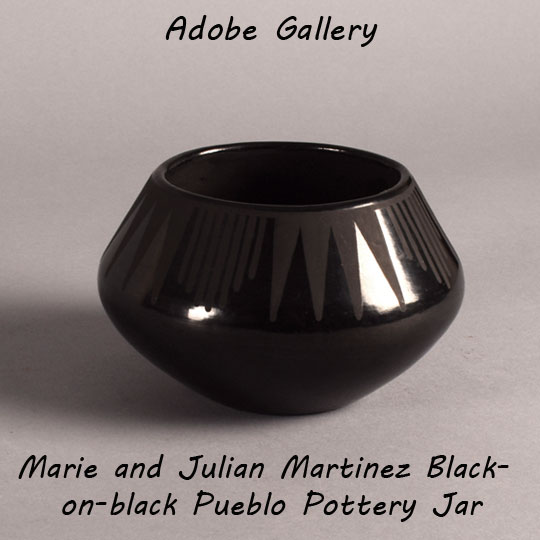 This San Ildefonso Pueblo pottery jar is an early one made by Maria Martinez and painted by Julian.  This is indicated by the signature of Marie on the underside.

Maria and Julian were the first potters to regularly sign their pottery.  They refused earlier to sign their names, but, eventually, Maria was encouraged to do so.  Maria first signed pottery in 1923 using the name Marie, even though her name was Maria.  She was led to believe that Marie would be more familiar with the non-Indian public.  Those early ones were painted by Julian, but his name was not added until 1925.  Not all these early pottery carried Julian’s name. [Spivey, 2003:163]

This jar was most likely made around 1927, as that is when it was collected, according to documentation provided to us.  The design placed on the vessel wall is one of Julian’s exquisite, yet simple, vertical lines and triangles, most likely representing rain.  Each line was placed on with the utmost care.

This jar is among several that were collected by Mary Louise Mark of Westerville, Ohio.  Ms. Mark (1878-1972) was a Professor of Sociology and Statistics at Ohio State University.  She acquired most of the collection during her participation in 1927 on a “Survey of the Conditions of American Indians” sponsored by the Institute of Government Research (later known as the Brookings Institute.)