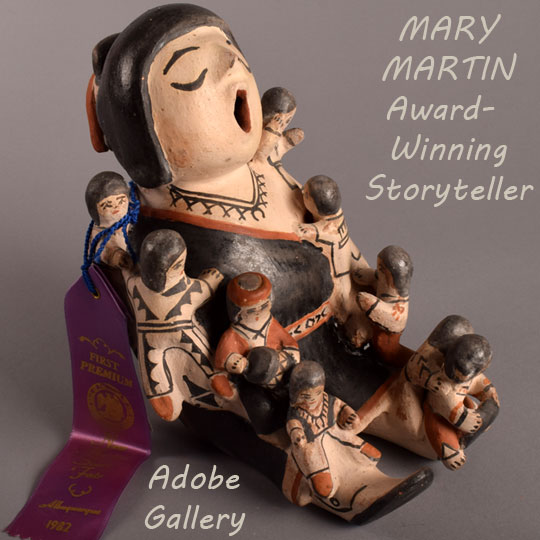 This is an extraordinary storyteller figurine by Mary Martin—larger in size than most of hers and with more children than usual.  The judge at the 1982 New Mexico State Fair, who was Isleta Pueblo potter Stella Teller, judged it to be a First Place winner.  Entries into the State Fair were required to have been made during the year of entry, so this was made in 1982. The female adult has her nose turned up in a charming manner, her mouth is fully open in speech or song, and her eyes are closed. Her hair is tied up in the back in a chonga and she is wearing a traditional pueblo dress that is over one shoulder and under the other.  A squash blossom necklace, woven belt, and white moccasins complete the dress.  The 10 children are scattered up both sides of the adult and on her back.  They all seem to be distracted in some manner.  One boy has a drum.

Adobe Gallery purchased this figurine from Mary Martin in October 1982, most likely the day she picked it up from the State Fair exhibition.  We sold it to the client from whom we now have it back to sell aain.  The First Premium ribbon is included in the purchase.