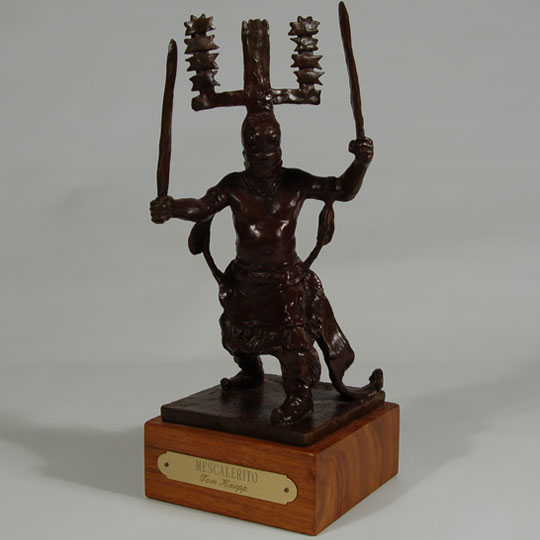 Tom Knapp casts his own bronzes in the backyard of his studio, as part of a neighborhood "Pour In" that has been described in New Mexico Magazine. His series of contemporary American Indian ceremonial dancers was featured in Art West, which quoted Knapp as claiming that "vitality, movement, is the most important thing in sculpture, not the detail." His work is in five public collections and he is listed in Who's Who in American Art.

This bronze Western Sculpture represents the Apache Gaan Dancer, popularly called the Crown Dancer because of the large head piece worn by the dancers. These dancers are more appropriately named the Gaan and they can appear at a girl's puberty ceremony and at curing ceremonies. The style of the headpieces of the Gaan is an indication of the ceremony in which they are appearing. The Gaan personify the four Mountain Spirits, supporters of the four corners of the earth, providing for world balance. The dances represent the powers of the Gaan, protectors of the Apache.

This bronze sculpture is entitled Mescalerito and is #39/100.  I do not see a date on the bronze figure.

Recommended Reading: Beyond Tradition: Contemporary Indian Art and Its Evolution by Lois Jacka

Provenance: from a client in Texas 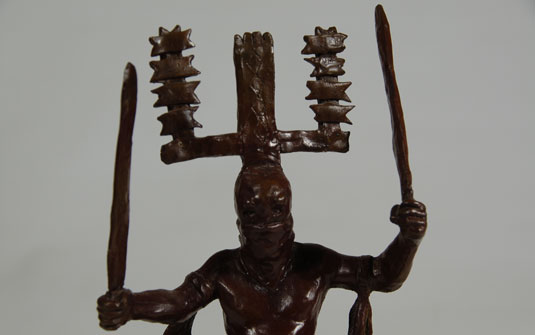 Apache (SOLD)
by Will Levington Comfort

The Medicine Men of the Apache
by John Gregory Bourke, Captain, Third Cavalry, U. S. Army