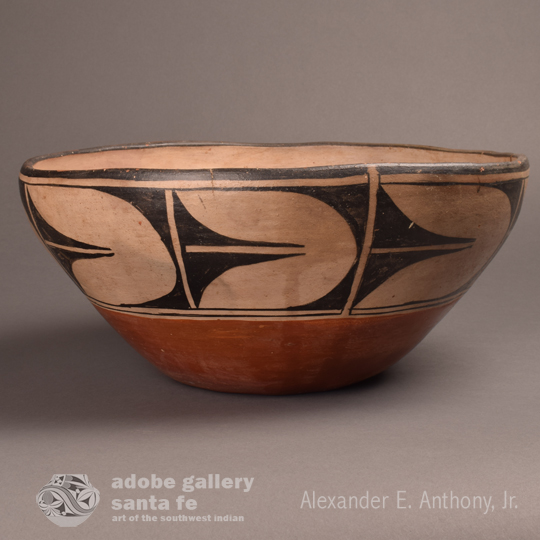 It appears that this Kewa pottery bowl served pueblo purposes before finding its way to the market.  There is some wear pattern to the interior and there are a couple short rim cracks. The bowl probably dates to as early as the 1920s or as late as the 1940s-50s.

Santo Domingo members are known as being the most aggressive traders in a pueblo that otherwise is considered very conservative.  Santo Domingo men boarded the trains that passed the pueblo daily, starting in 1880, to sell pottery being made by the female family members.  Sales such as these provided funds for the purchase of supplies and food from stores or the trading post. The leaders at the pueblo tolerated the men selling pottery to outsiders but frowned upon and discouraged the women from dealing with outsiders.  The elders also forbade the sale of other pueblo items such as costuming or clothing used in dance celebrations.

The railroad line was only a quarter mile from the pueblo, making it easy for the men to board to sell their wares and some stayed on all the way to Gallup and then boarded the return train to the pueblo.