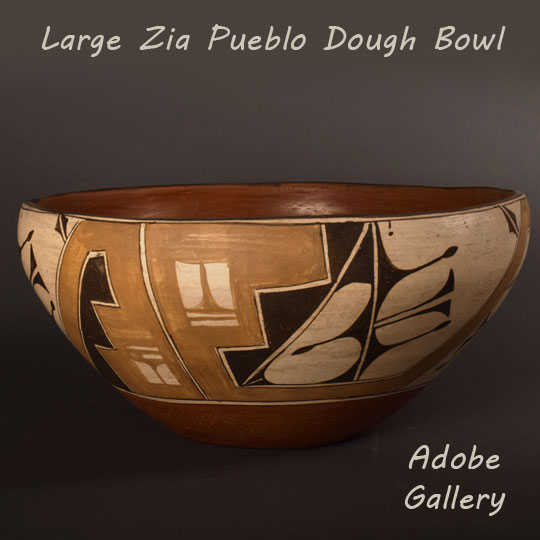 This dough bowl is traditional to Zia Pueblo in all aspects except one—that is, the use of the yellow slip rather than the orange/red slip seen on other dough bowls.  The yellow slip is traditional to Zia pottery, but generally not used on dough bowls, being saved for use on ollas.  Perhaps the potter was innovative or perhaps she had no orange/red slip.  We will never know, only admire her for her bringing something new to our senses.

The design is typically divided into two segments—one long and one short and square.  The long panel has a wide band that goes under and then over black design areas. The two panels of this type are separated by the shorter ones that feature black designs over a cream color.  The interior is stone-polished red slip.

This pottery dough bowl appears to be from the late historic period, that is, from late 1930s or early contemporary period, from the early 1940s.  It has a stone-polished red interior that does not show any indication of prior use at the pueblo. The design band is typical of most dough bowls from Zia.  The design varies only slightly, if at all, on all Zia dough bowls.

Provenance: collected by a gentleman when he lived in New Mexico and now that he has moved to San Francisco has decided not to take it with him.

Recommended Reading:  The Pottery of Zia Pueblo by Harlow and Lanmon