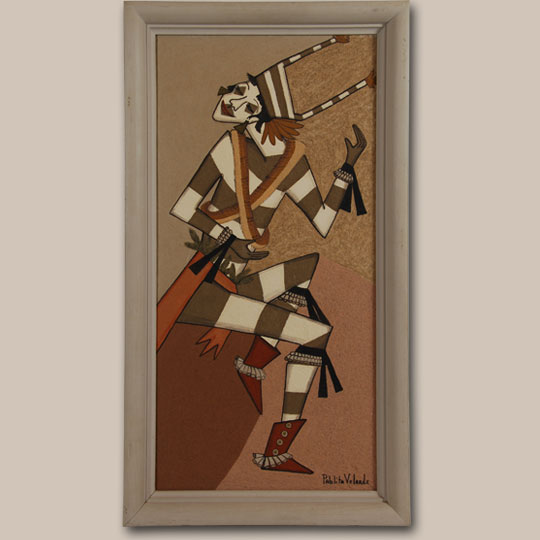 Clowns are part of the religious celebrations at all of the 19 Pueblos. They may be called by various names—Tewa Clowns, Koshari, Koosa, etc., but their functions are similar. They are ribald entertainers who dance and cavort during breaks between Pueblo dances.

The Koosa clown portrayed by Pablita Velarde (1918-2006) Tse Tsan - Golden Dawn in this painting is, like many of her works, a subject that used to appear at the *Tewa Pueblos [Nambé Pueblo, Pojoaque Pueblo, San Ildefonso Pueblo, Ohkay Owingeh (formerly known as San Juan Pueblo), Santa Clara Pueblo, Tesuque Pueblo] but may not at this time. They are part of the history she was so fond of and that was relayed to her by Old Grandfather the Storyteller.

Koosa clowns still appear at the Keres Pueblos (Cochiti Pueblo, Santo Domingo), and were, just in the past few years, reintroduced to San Ildefonso Pueblo by the society at Cochiti. I do not know if they are still in existence at Santa Clara Pueblo or not.  They may or may not have always existed or may have been re-introduced there by Cochiti as well.  It is a very secretive society.

The clown has white body paint with black stripes throughout. If these clowns were not active at Santa Clara Pueblo during Pablita’s adult life, it is quite possible that she fashioned this image from those she might have seen at Cochiti or Santo Domingo Pueblos.

Pablita presented this clown in a modern or cubist style.  The edges and angles are sharp rather than rounded.  The face is much more like a Joker's face than a traditional Pueblo clown and is pleasant in its happiness.  The eye lashes are long and dark and the mouth is rosy red and smiling. This is a departure from Pablita’s normal presentation of clowns and is an indication of her continuing to expand her styles and experiment with new ideas.  This one turned out to be very successful.

*The Tewa (or Tano) are a linguistic group of Pueblo Native Americans who speak the Tewa language and share the Pueblo culture. - Source: Wikipedia

Condition: very good condition and in the original frame.

Provenance: from the collection of a Santa Fe family.