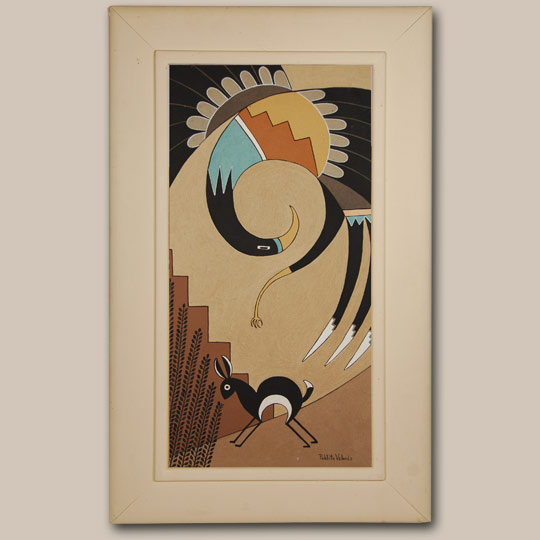 Pablita Velarde (1918-2006) Tse Tsan - Golden Dawn enrolled at the Santa Fe Indian School following completion of the 6th grade of elementary school at St Catherine's Indian School in Santa Fe.  She entered the Santa Fe Indian School as an 8th grader (having skipped 7th grade).  She took an art class under the tutelage of Dorothy Dunn and it became her favorite class.  She said that Dunn had her sit next to her own desk because the boys in the class picked on her since she was the only female in the class; they did not want a girl in art class.

Pablita Velarde (Santa Clara Pueblo) said that Dunn taught her to make beautiful earth colors by grinding up different earth minerals with a mano and metate like the ancients had used to grind corn.  Her use of earth minerals for paints continued throughout the rest of her life.  I was not aware that Velarde started with earth mineral paints as early as the 8th grade.  I have always assumed it was something she discovered as an adult.

This mineral earth pigment painting shows a very stylized eagle swooping down to capture a Mimbres-style rabbit.  The painting is in the original frame.

Provenance:  from the estate of the Balcomb family, owners of several art galleries, the last one of which was closed in 1976.  The state has now been settled and this painting if from one of the heirs.