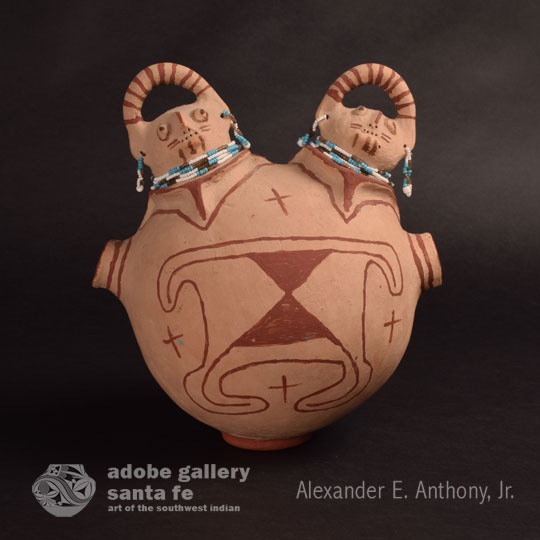 Artist Barbara Johnson was a contemporary of Mojave potter Elmer Gates and perhaps learned to make effigy vessels from him.  Gates is known to have taught a number of artists of Mojave and Maricopa tribes. He also tutored Santa Fe ceramicists Rick Dillingham.

Barbara Johnson (c.1925-2004) was a member of the Maricopa Tribe but is known for making pottery of the Mojave style, particularly effigy vessels such as this double-headed one embellished with beaded earrings and necklace.

Maricopa pottery making essentially was non-existent at the turn of the 20th century.  However, with the diligence of Elizabeth Hart of the United States Indian Service Home Extension Department, there was a revival, not only in production but also in quality of workmanship.

The Maricopa Reservation is located on the Salt River and Gila River region just outside Phoenix, Arizona. There are very few Maricopa Indians remaining, and almost no potters among them. Some of the well-known names are Ida Redbird, Mable Sunn, and Barbara Johnson.

Provenance: from the estate of John Barry, author of American Indian Pottery: An Identification and Value Guide

Recommended Reading: Dirt for Making Things: An Apprenticeship in Maricopa Pottery as told to Janet Stoeppelmann by Mary Fernald Dirt for Making Things: An Apprenticeship in Maricopa Pottery [SOLD]
by Janet Stoeppelmann, as told by Mary Fernald