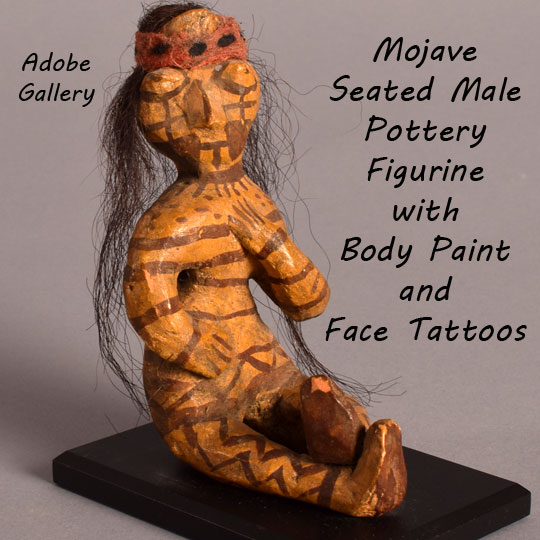 It has been thought that the Mojave made most of these human images for sale.  They were a result of the train having arrived at Needles, Arizona in 1883. The women, familiar with the dolls being made by their southern neighbors, the Quechans, decided these would be good items to sell to train tourists.

The dolls were made in the manner of the Mojave people, in that they were painted in the likeness of the people.  “For tattoos, the Mohave went to a specialist, an individual who . . .was skilled in the art. The person to be marked placed his or her head in the lap of the tattooer, who drew the designs in charcoal. Pricking small wounds into the face was a painful process that took three to four hours and hurt until the chin became numb.  The tattooer rubbed finely powdered mesquite or willow charcoal into the wounds, taking care not to open them. For four days afterward, newly tattooed people ate only soft foods and slept on their back to be sure the designs remained symmetrical.” Furst 2001:55

The Mojave also practiced body painting.  They used permanent tattoos for the face and paint for their bodies.  “Mojave women covered their entire bodies with red paint against sunburn, but men rarely did.  In addition to protecting the skin, the Mojaves believed that pigments had powerful properties.”  Furst 2001:54  Body paint might last only for a day because of sweat, so it became necessary to paint their bodies every day. Some designs were reserved exclusively for the use of women or men.

The pottery figurines, such as this one, clearly illustrate body paints and facial tattoos.  The hair of the dolls was pushed into a depression on the head made while the clay was malleable.  The dolls were made of clay and painted, but generally not fired. However, they seem to be of solid strength.

There are several potters of the twentieth century who made figurines—Annie Fields, Elmer Gates, Betty Barrackman.  Most of the figurines, especially earlier ones, do not bear the name of the maker so no attempt will be made to guess who might have made this one.

Condition: this Mojave Seated Male Figurine with Body Paint and Face Tattoos is in excellent condition

Provenance: from the estate of Henry Christensen III of New York who had purchased it from Adobe Gallery in 2004.  Adobe Gallery had previously acquired it from the Chuck and Jan Rosenak folk art collection.