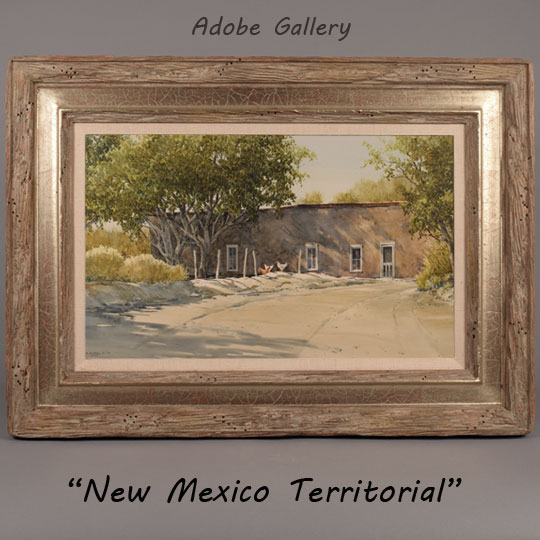 “New Mexico Territorial” is a watercolor painting by award-winning New Mexico artist Morris Rippel. We have only handled a few of Rippel’s works in the past, but they have all been excellent, so we’re pleased to offer this piece. Rippel is known for his realistic depictions of Southwestern landscapes and buildings, which makes sense given his background as an architect. The pieces we’ve studied in the past displayed knowledge of and respect for the unique architectural styles of the region.

“New Mexico Territorial” is a serene scene. The viewer stands in the middle of a dirt road, which winds off to the right and out of sight. Bushes and trees rise from a small bank on the road’s left side, casting soft shadows over the earth below. Three chickens have scaled the bank; they stare off into the brush as they soak up the sun. Behind them, the titular Territorial style home appears. It’s a sharp, accurate portrayal that reveals the fruits of Rippel’s earlier career.

Rippel’s soft, translucent watercolors suit this scene perfectly. Depth and texture abound, particularly in the plant life, which appears here in sharp and appealing detail. Certain areas are all light and others are all shadow, but many fall somewhere in between as the sun slowly makes its way from east to west. These nuanced expressions of light and shadow elevate both the magic and the realism of the image.

The painting is signed M. Rippel, NAWA and dated ‘76 in lower left. NAWA refers to the National Academy of Western Art, of which he was a member and repeated award winner.  The piece is framed in a carved wood frame with a gold interior, under clear acrylic. The title, medium, date, and artist's name are handwritten on the back of the frame.

Morris Rippel (1930-2009) was an artist and architect who, except for his service in the Korean war, lived his whole life in Albuquerque. Rippel attended the University of New Mexico, from which he earned a degree in architecture, a career he practiced for 15 years. He decided to try his hand at fine art painting and took two paintings to a gallery in Santa Fe, which sold them immediately. He accomplished much during his career and received many awards, including the Prix de West - National Academy of Western Arts award and a solo exhibition at Tulsa, Oklahoma's Gilcrease Museum. Rippel exhibited internationally and placed pieces in the collections of many prominent museums.

Provenance: this Morris Rippel Watercolor Painting titled "New Mexico Territorial" is from the collection of a resident of Oklahoma

Recommended Reading: 40 Watercolorists and How They Work by Susan E Meyer ALBUQUERQUE A City at the End of the World [SOLD]
by

SPECTACULAR HOMES OF THE SOUTHWEST [SOLD]
by