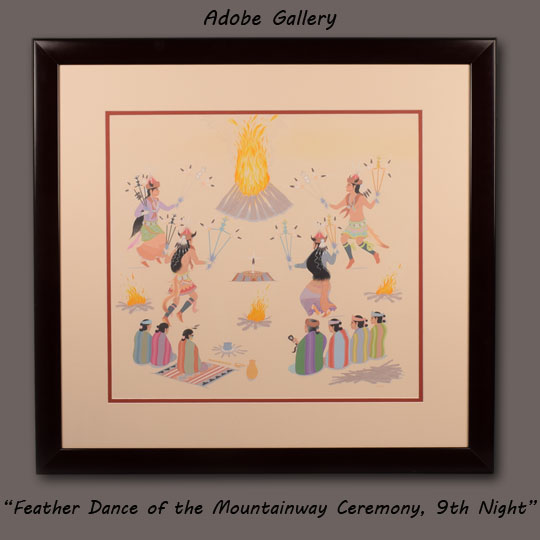 This original painting was created by Myron Denetclaw, a young artist whose work is influenced by early Diné traditionalists. Like his predecessors, Denetclaw’s work often focuses on Diné ceremonies. His incredible knowledge in this area is evident in his work, which presents ceremonial scenes accurately and beautifully. This particular piece is a large, elaborate offering presented with an expansive color palette. The warm pastels preferred by Harrison Begay appear, working together beautifully with brighter tones, which add a subtle modern flavor to the piece. Denetclaw’s line work is, as always, exceptional—he goes into great detail in areas that would be ignored by less skilled hands—which makes for a piece that is a pleasure to study up close. Zooming out to view the piece as a whole, we find a nearly symmetrical arrangement of figures, which gives the piece an appealing rhythmic quality. This is outstanding work from a gifted young artist.

Denetclaw graciously provided a detailed description of the piece:  “The painting depicts a scene of the final night during the Mountainway ceremony, Dził’ki’ji’ Háátal’. Throughout the last day, most of the ceremonial activity is held outdoors within a large circle of juniper and cedar boughs. The enormous pile of logs for the sacred bonfire is at the center of the brush-corral, acting as both heat and light for the spectators. As evening falls, several small fires are ignited as people, far or near, gather to witness and participate in the ceremony. The duration of the final night showcases different dance groups, in which one of these acts includes the sacred feather dance. An eagle plume is carefully placed on a basket. The chanters take their places near the edge of the grounds and sing. The eagle plume magically rises upward with the beating of the basket-drum and rattles—the lively movement from the feather dancers and aliil’ (prayer-wands) source the plume to dance by itself. Once the chanting ends, the eagle plume gently reclines back to the ground. Four sets of songs are sung, and once the singing concludes, the chanter redirects his dancers towards the patient. There, he administers prayers directly to the patient and afterward leads his dance group out of the brush corral.”

The painting is signed Denetclaw in lower right. It is framed under two layers of matting in red and cream tones, in a wide wood frame.

Myron Denetclaw (1999- ) is a Diné of the Navajo Nation painter who was born in Shiprock, New Mexico.  He resides in Shiprock with his family. His maternal clan is Táchiiníí and his paternal clan is Hooghanłání.  Denetclaw paints in the style of traditional Diné painters Harrison Begay and Beatien Yazz.   He also cites the naturalism of Bob Ross as an influence. Denetclaw has received awards and accolades for his paintings, including Best of Show awards from a variety of respectable institutions.  Denetclaw is currently studying studio arts at Diné College in Shiprock.

Provenance: this Myron Denetclaw Original Painting "Feather Dance of the Mountainway Ceremony, 9th Night" is from the artist