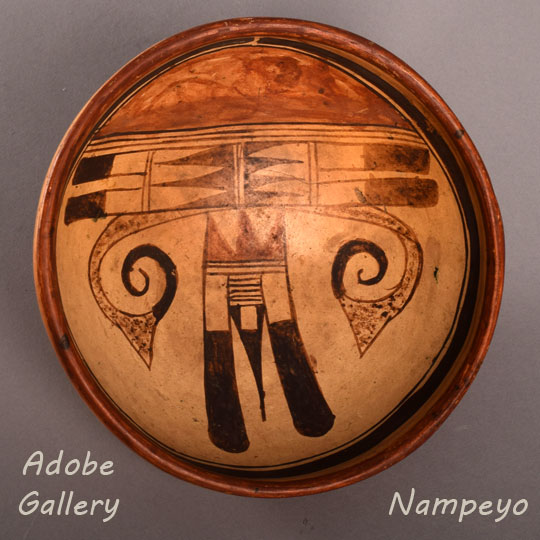 Much can be said of the work of master potter Nampeyo of Hano.  She has been studied to be fastidious, creative with revival content, and invested in perfection with her pottery.  This bowl is special amongst her work, for several reasons.

What Nampeyo was very much known for are exactly the design elements ornamenting this bowl.  A red rim with dark brown dots, over a cream slip, gives way to a recognizable spirit line, broken on one end as one travels inside the slope of the bowl.  The spirit line is followed closely by an unbroken, finer line of dark brown which meets with a sun, rising below the spirit line’s break.  Geometric patterns reach below the sun, shifting in ways reminiscent of mountains and feathers.  Below, two extending spirals dappled with yucca frame one of many versions of a Sikyátki set of eagle feathers.

These patterns and the shape of the vessel signify the style and vision of master potter Nampeyo of Hano (Kramer,1996:179,185).  What is most distinctive about this bowl, however, is that not all aspects are exact.  This gives one a clue as to the age of the bowl.  The artist was inseparable from her desire for perfection, and yet— the dark brown dots along the red rim are non-uniform, and as the pigment has been applied throughout— it is outside the lines in many places.

Nampeyo of Hano suffered from trachoma and began to lose her eyesight around  the 1920s.  At the point where she deemed her eyesight too poor to produce pottery of the caliber she desired, she accepted help from her family members.  While she continued to shape vessels by touch, it was her family (most notably her daughter, Annie Healing) who painted the pieces.

Combining this information, it can be suspected this bowl was shaped and decorated by Nampeyo herself, in the 1920s (ibid, 174).  This piece may be one of a kind or belong to a very select group that provided evidence to the artist that her eyesight was eluding her.  If this is so, the added interest is immeasurable.

Nampeyo of Hano (1857-1942) was a widely influential potter who lived and worked on the Hopi Reservation in Arizona.  Nampeyo is regarded today as one of the finest Hopi-Tewa potters and one of the most important figures in Native American pottery.  Her work is displayed in museums and collections around the world.   Nampeyo was taught how to make pottery by her grandmother and began earning an income as a potter while she was still just a teenager.  Less interested in innovation than perfection, Nampeyo took an early interest in the design and form of ancient Hopi pottery, which she believed to be superior to the pottery being created by her contemporaries.  She visited the ruins of ancient villages and copied designs from pieces of prehistoric and protohistoric pottery onto paper, then reproduced the designs on her own vessels.

Provenance: this Nampeyo of Hano 1920s Sunrise and Eagle Feather Hopi-Tewa Bowl is from a private collection

Reference: Nampeyo and Her Pottery, by Barbara Kramer