Original Painting of Diné Men on Horseback by Beatien Yazz 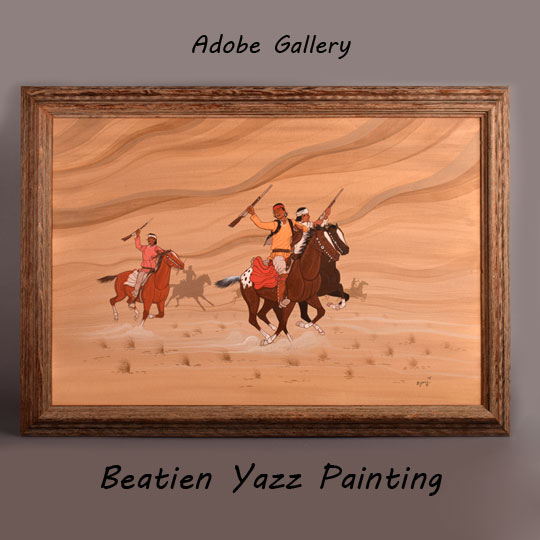 This original painting was created in 1978 by Diné artist Beatien Yazz.  The painting features a group of Diné men travelling on horseback through a windswept Navajo Nation.  Three men are placed prominently in the foreground; others exist as shadows off in the distance.  Two of the three men raise their guns above their heads.  The third appears to be loading his weapon, or perhaps lowering it into his eyeline to set his sights on a target.  The shadowed men in the distance are similarly lively despite being made of little more than gray paint.

Yazz did a fine job with his subjects, as usual.  Each man and each horse are carefully detailed, accurately proportioned, and attractively colorful.  This will come as no surprise to Yazz collectors.  What is most unique about the piece is the environment in which the men exist.  They travel through an incredible sandstorm that blurs the line between earth and sky, covering the entirety of the large painting with textured waves of brown, tan, and gray tones.  There is no visible horizon line or distant cluster of hills and mesas; the image is all desert wind and smokey sand.  This is a wonderfully unique image from Beatien Yazz.

The painting is signed B. Yazz and dated 78' in lower right. It is framed in the original wood frame.