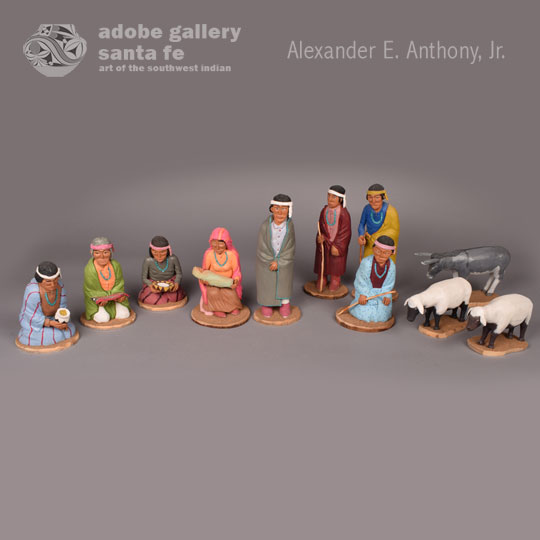 This eleven-piece wood nacimiento was made by Diné artisan Tom Yazzie in 2000 and purchased from him by Adobe Gallery at that time.  It was sold to a client and now we have it back from him to sell again.

Many people became aware of Navajo folk art through the book released in August 1994 titled The People Speak—Navajo Folk Art by Chuck and Jan Rosenak. Historical recordings of Navajo folk art date to the 1870s when it was noted that simple mud toy figures were being made.  Recognition of the contemporary movement began in the 1960s with artists Charlie Willeto and Tom Yazzie.

Tom Yazzie is noted for his fine wood carvings depicting Navajo scenes such as a silversmith working or a Navajo woman weaving. He was most famous for his carvings of Navajo ceremonial life.  His carvings are from cottonwood root and painted with acrylic paints. All his figures are dressed in traditional Navajo clothing.

I first heard of Tom Yazzie when I was working with Guy and Doris Monthan on their upcoming book Nacimientos—Nativity Scenes by Southwest Indian Artisans in 1978.  I contacted him to see if he would make a nacimiento for our annual Christmas exhibit at the Albuquerque gallery.  Over the years, Tom probably made two dozen sets for us and always delivered them in January or later after our exhibit for the season closed.  We still had no trouble selling his nacimientos even after the holiday season. The Monthans stated in their book that he had only made four nacimientos sets at that time.

Tom Yazzie (1930-2019) served in the U.S. Army between 1947 and 1954. During his off hours, he revived a childhood hobby by using his army-issue bayonet to carve wood. When he returned from Europe his friends encouraged him to begin carving seriously. The inspiration for Yazzie's works depicting Navajo life and ceremonies comes from his brother, a medicine man. He usually carves groups of people and dancers and adds found objects such as feathers and small stones to make them realistic. (Chuck and Jan Rosenak, The People Speak: Navajo Folk Art, 1994)

Provenance: originally purchased from the artist, sold to a client in 2000, and now have it back from that client to sell again