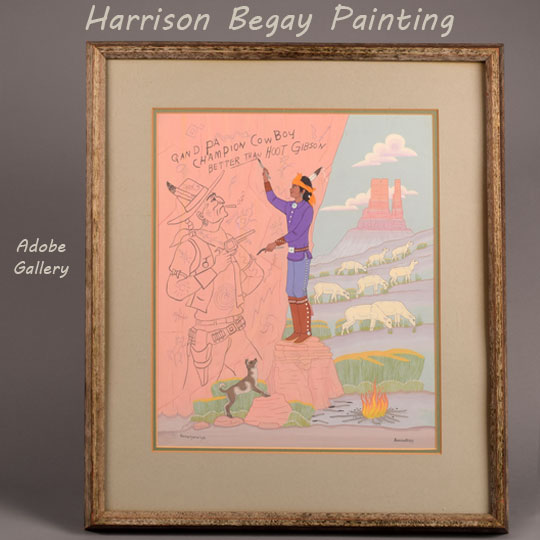 This untitled original painting was made by influential Diné artist Harrison Begay.  Those who are familiar with the artist’s work will recognize immediately what a unique offering this is.  Begay’s subject here is a young man creating graffiti on one of the Navajo Nation’s sandstone walls. The rest of the scene—a flock of sheep, a dog, a landscape composed of warm pastel tones—is typical of Begay’s work, but the main event is one we’ve never seen before.

Begay’s young graffiti artist has created a portrait of an elderly Diné cowboy.  The cowboy holds a pistol in his hand and a cigarette in his mouth.  A variety of petroglyphs appear within and around the man in a much lighter tone, suggesting that they’ve been around for much longer than the cowboy portrait.  The young man is finishing his piece by writing “Gandpa [sic] champion cowboy, better than Hoot Gibson.”  He’s underlining “better than”, making apparent the fact that he prefers the elderly Diné man over Gibson, an American actor and rodeo champion.  This warm and humorous image is unlike any Harrison Begay piece we have handled in the past.

The painting is signed Haskay Yahne Yahin lower left and Harrison Begay in lower right.  It is framed in a wood frame under two layers of matting in complementary green tones.

Harrison Begay (1917-2012) Haskay Yahne Yah - The Wandering Boy - was a world-renowned Diné (Navajo) painter who is generally regarded as one of the most successful and influential early Native American painters.  Begay studied under Dorothy Dunn at the Santa Fe Indian School in the 1930s, and then attended colleges in North Carolina and Arizona. From 1942 to 1945, he served in the US Army Signal Corps.  In 1947, Begay returned to the Navajo reservation, where he enjoyed a long and productive career as a painter. He is known to have continued painting into his 90s. Begay passed away in 2012, leaving behind a large body of work and a legacy in the world of Native art.

Provenance: this Harrison Begay Original Painting of Diné Graffiti Artist is from the collection of a resident of Texas