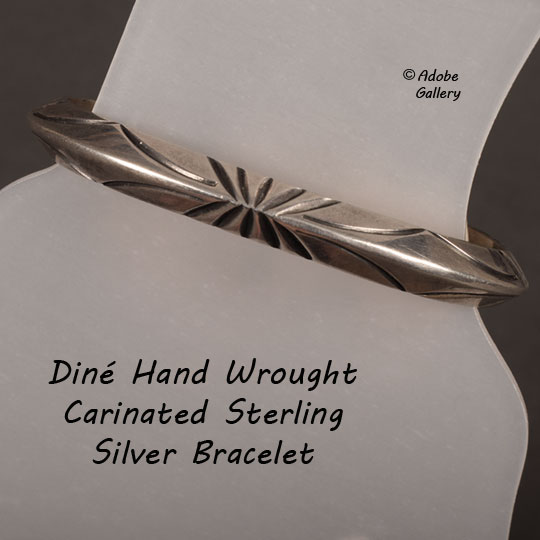 There is significant silver content in this Diné of the Navajo Nation bracelet. It is stamped on the inside INDIAN HAND MADE. There is no artisan's name. It was cast in a straight position and then heated and bent to its present position. The designs were scored into the casting stone before the molten silver was poured into the mold. The triangular shape of this bracelet led to it being named a carinated bracelet because it is shaped like the keel or prow of a ship.

Native American jewelers did not originally sign their name to their works, but eventually it became an acceptable practice. When visitors began arriving on the newly scheduled AT&SF train to New Mexico in 1880, interest in jewelry outstripped the availability.

We have access to early comments about the Navajo and their jewelry. Lieutenant John G. Bourke wrote of the Navajo in 1881 that both men and women were passionately fond of silver ornaments and fairly loaded down with it. Charles F. Lummis noted that the silversmith is a person of mighty influence. [Beddinger, 1973:41]

Businesses developed in response to the need for Native jewelry. Most of those businesses hired Navajo and Pueblo artisans to make jewelry which the merchants then marketed. To distinguish between "machine made" jewelry, which some of the merchants were offering, others stamped the jewelry INDIAN HAND MADE. This bracelet could be one of those from the enterprising merchants who employed Navajo as silversmiths.

AT&SF: The Atchison, Topeka and Santa Fe Railway (reporting mark ATSF), often abbreviated as Santa Fe or AT&SF, was one of the larger railroads in the United States. Chartered in February 1859, the railroad reached the Kansas-Colorado border in 1873 and Pueblo, Colorado, in 1876. To create a demand for its services, the railroad set up real estate offices and sold farm land from the land grants that it was awarded by Congress. Despite the name, its main line never served Santa Fe, New Mexico, as the terrain was too difficult; the town ultimately was reached by a branch line from Lamy.

Provenance: this Diné Hand Wrought Carinated Sterling Silver Bracelet is from the collection of a client