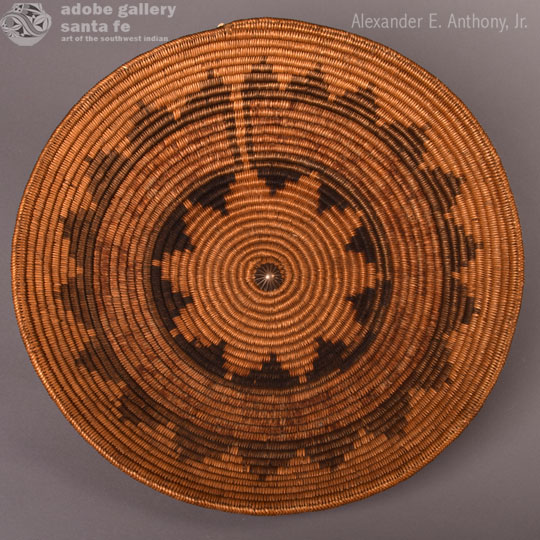 This Diné very old ceremonial or wedding basket came to us from the Marti Struever estate with a note that records indicate that it was from the personal collection of William Haskell Simpson of the Fred Harvey Company.  William Haskell Simpson was the general advertising agent for Atchison, Topeka, and Santa Fe Railroad in the late 1800s and early 1900s. He is best known for the creation of the AT&SF art calendars which featured Southwestern art. He was responsible for purchasing the railroad’s early art collection which he used in advertising the Fred Harvey Company.

The basket has attached to it two white tags that contain handwritten information about the meanings and uses of such a basket.  The ink has faded somewhat and perhaps gotten wet and the ink ran. This is possibly a memo written by Simpson to explain the purpose of the basket—that it was for ceremonial use and not made as a tourist item.  Such information appealed to potential buyers as the object had more significance than just a souvenir.

This basket is of a very fine weave. Each weft stitch was placed extremely close to the adjoining stitch.  The foundation was comprised of rods of the same diameter resulting is a basket of the finest weave.

Diné baskets or Ts’aa’ have a number of uses. They are used ceremonially to hold prayer sticks and medicine bundles, because it is taboo for ritual objects to touch the ground. They are important for Kinaalda’ ceremonies, the coming of age ceremony for young women at puberty, where they are used to hold yucca suds for ritual baths and hair washing of the young woman. They are used in wedding ceremonies to hold corn pollen and food.

The designs in Diné baskets have significance and depending on the interpretation can symbolize the creation myth, life’s journeys or be a map of the Navajo cosmos. The simplest interpretation is that the white center is the emergence area, or area of birth. The black coils represent clouds or four sacred mountains. The red band is the sun’s rays which bring life. There is always a line from the center of the basket to the outer rim, a path from the center for the Spirit to come and go. The pathway meets at the outer edge where the weaver has stopped coiling.

Provenance: originally from the personal collection of William Haskell Simpson of the Fred Harvey Company.  More recently from the estate of Marti Struever of Santa Fe. Treasures of the Navajo (Treasures) (SOLD)
by Theda Bassman